You are at:Home»Smart Beta Channel»How a Changing Economy Could Dull the Impact From Oil Price Shocks 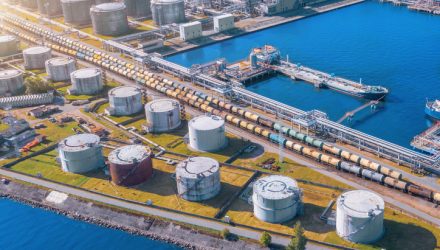 With recent Middle East tensions, investors were again reminded of the potential for oil prices to move higher on geopolitical worries. Benchmark WTI crude increased 3.4% in roughly two trading sessions, though prices have since scaled back to pre-crisis levels.[1]

Still, this recent episode should bring the prospect of oil price shocks back to the forefront. The common wisdom for these events is that, since many developed nations have consumer-driven economies, any prolonged bump higher in crude oil could have long-lasting negative effects on GDP.

While this may largely still be the case, it is possible to argue that this is outdated thinking. The fact is that the economy is not nearly as carbon-intensive as it used to be.

According to the U.S. Energy Information Administration, America’s energy usage has risen from 84.47 quadrillion BTUs in 1990 to 101.125 quadrillion BTUs at the end of 2018, though the mix has changed remarkably in that time.[2] Coal’s slice of the pie has shrunk by 40%, while renewables and nuclear now take up close to 20% of total energy sources, up from roughly 14.4% in 1990. And while oil usage as a percentage of the overall has declined, overall consumption has risen by roughly 3.39 quadrillion BTUs in the study period.

While that sounds like an impressive rise for oil consumption, it fails to consider the rapid growth of the U.S. economy since 1990. As measured by GDP, the American economy was at just over $6 trillion in 1990 but was nearly $20.9 trillion at the end of 2018.[3] In other words, overall energy usage is up 19.71% since 1990, the economy has grown in size by 248%, and oil consumption has increased by just 10%.

This increased economic output per unit of energy, coupled with the mix tilting towards renewable or clean sources, means that the American economy now needs less fossil fuels in order to generate each dollar of gross domestic product. This may suggest that oil price surges today could have less of an economic impact since the current economy is so much less fossil fuel intensive. As shown in the chart below, America has seen the fossil fuel intensity of GDP decline by over 40% since 1990.

Europe also experienced a similar percentage decline, even though it was starting the time frame at a much lower level of intensity. As such, fossil fuel shocks could have even less of an economic impact to Europe than the U.S., though both appear to be far better positioned today when compared to thirty years ago.

Rising oil prices could still have a negative impact and the potential hit to the consumer should not be overlooked. However, to think that an energy shock today will have the same effect as one back in the early 90’s appears to be misguided.

The market’s top sectors and the country’s energy mix have changed immeasurably in 30 years, and investor thinking regarding the relationship between fossil fuels and GDP may need a similar transformation. As the economy continues to lean more heavily on tech, finance and consumer sectors— not to mention an increased focus on clean energy—the fossil fuel intensity of GDP could continue to plunge, further decreasing the potential impact from an oil price shock in the years ahead as well.