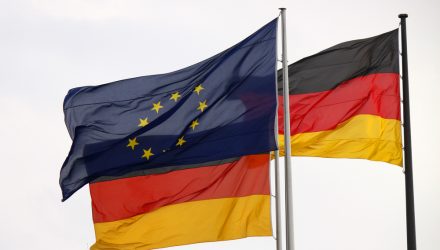 The DBGR ETF: Germany Access Minus the Euro Fluctuations

ETF investors looking for international diversification in the European Union can typically look to its largest economy: Germany. Yet pandemic risks remain and it’s important to keep currencies hedged via ETFs like the Xtrackers MSCI Germany Hedged Equity ETF (DBGR).

It will invest at least 80% of its total assets (but typically far more) in component securities of the underlying index. The fund has a 0.45% expense ratio that falls below its categorical average.

DBGR recently made a move above its 50- and 200-day moving average. In terms of momentum, there’s still room to run before it breaches overbought territory.

Even as the European markets ride the momentum of the vaccine rally, there are still fundamental challenges ahead. The wildcard known as the pandemic still remains as “EU members are battling to reach a consensus over the bloc’s US$ 2.2 trillion stimulus and budget deal,” according to an FX Empire article.

In Germany, economic activity appears to be picking up.

“Although Germany’s recently-released October factory orders, industrial production data, and retail sales all exceeded market expectations, the road ahead still poses downside risks, as warned by the Bundesbank,” the article said further. “Covid-19 curbing measures are still in place until next month, which means that the Q4 GDP print may fall back into contraction.”

From a technical perspective, more weakness could be ahead for the euro, which justifies the need for a hedging component inherent in funds like DBGR.

“However, from a technical perspective, the recent pullback appears to be in order for the world’s most-traded currency pair, given that EURUSD’s 14-day relative strength index had crossed the 70 mark, which denotes ‘overbought’ levels,” the article added.