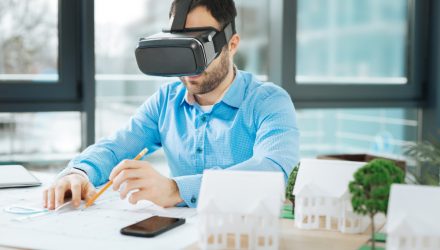 By Eric Dutram, Contributor for DWS

The growth of the technology sector has been one of the biggest stories in the market over the past decade. Driven in large part by surging internet usage, a variety of new applications and devices have completely reshaped not only the economy but our lives as well.

This trend has arguably begun to accelerate in recent years, at least as demonstrated by global internet traffic figures. In terms of exabytes (an exabyte is roughly equal to one billion gigabytes) per month of internet traffic, we have seen 64% growth since just 2017, with projections of a near doubling by the end of 2022. As shown in the chart below, we are potentially looking at a 26% compound annual growth rate in global internet traffic from 2017-2022 which suggests that this story will continue to dominate the market for years to come:

While smartphones are an obvious culprit for these projections, flying somewhat under the radar is the projected growth in both TV internet usage, as well as the growing dominance of internet video. And with the continued growth of the Internet of Things, Artificial Intelligence, machine learning and driverless cars—just to name a few of the internet-focused applications taking over the spotlight as of late—the 26% annual growth rate in traffic may prove to be a bit too conservative if anything.

Investors may assume that the only companies that are benefiting from these trends are in the high tech corner of the equity market. However, that may not be the case. Data centers may offer investors a potentially less volatile—and higher income generating—alternative for those seeking to benefit from growing internet traffic but in the world of real estate.

What is a data center?

A data center can be thought of as part real estate part high tech firm. It is a location that houses critical IT infrastructure for both organizations and the internet at large. While potentially resembling a run-of-the-mill office building from the outside, the inside consists of specialized floorplans and equipment such as servers and networking devices, as well as back-ups for cooling or power. As one might expect, the power consumption is enormous for these facilities, at least when compared to more “traditional” office-like real estate, while security is also a key component of the cost picture.

Generally speaking, owners of these data centers rent out the facilities to clients which often utilize the data centers as traditional “enterprise” solutions to keep servers and data safe. Others utilize the facilities in order to tap into a network effect, connecting to other service providers at these crossroads of the internet that often possess more private and secure connection possibilities.

Clients often do not build out their own for a number of reasons. Sometimes, it is done in order to keep these capital intensive items off of their balance sheets, or because users have trouble replicating network effects on their own, or simply because data storage REITs can often provide the services at a cheaper rate thanks to greater economies of scale. No matter the reason, the demand for these data centers has grown along with the use of internet data, a trend which has had a notable impact on the sector’s performance.

With such continued strength in internet traffic and the increased importance in connectivity for a number of businesses, it shouldn’t be a surprise that data centers have been strong performers for investors. Data centers, as represented by the MSCI US REIT Index’s data center securities, have seen an average of 21.1% in annualized total returns over the past five years. [1] This has easily beaten out the broader global infrastructure market for the same time frame, and a variety of subsectors as well. 10-year annualized returns—at over 16%– are also impressive, but it is clear that the spike in internet traffic may be having an outsized impact on this sector and the performance of its securities.

Plus, just like other REITs, they can avoid corporate taxation by paying out 90% of income to investors, often resulting in solid yields. Current yields are in the 2.5% range, though this can vary significantly by firm, potentially making data center REITs yield destinations as well. [2]

Data centers are the infrastructure behind the growth in internet traffic in the past few years. The sector also allows investors to potentially play a broad trend instead of picking which tech giant will win an extremely competitive battle for supremacy online. Investors in data centers don’t necessarily have to worry about which tech company comes out on top, so long as demand for data continues to soar in the years ahead.

Given the broad trends in the market and the variety of new applications that could require even more data, it seems as though data centers could be just the blend of tech and real estate that has been missing from some investors’ portfolios.