You are at:Home»Smart Beta Channel»Could A Machine Learning ETF Be The Next Step For Forward Thinking Investors 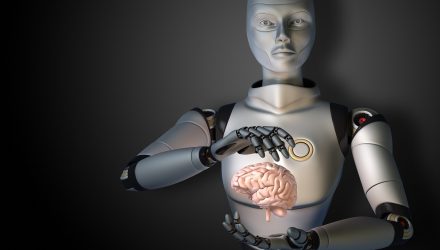 Ian Young August 20, 2019
The debate between active and passive portfolio management has been going on for years. Is it more profitable to try and select stocks yourself, constantly seeking to maximize edge by buying and selling based on market conditions, or is it more lucrative to have longer holding periods and less turnover, regardless of market fluctuations? Artificial Intelligence ETFs could be the answer.
“Active management has been out there for a long time, and under performing. They haven’t found a solution yet. And I think the technology that I run into is going to help the marketplace to do that,” said Procure Holdings President Robert “Bob” Tull on CNBC.
Tull believes that AI will enable investors to use computers and data analysis to optimize stock portfolio performance in the form of an ETF.
“When you look at the key to this new technology, it’s ensemble analytics—Touring Technology has been really working on this for several years now—and what happens is you’re going to be taking a technology which is based on predicting out-performance. The technology has been around for years. It’s just never been moved into the asset management space. So getting data collected, running permutations against it to figure out which is the best, and then really focusing on the best of the best selection that’s diversified. Picking a concentrated bet is not gonna be what an ETF is doing,” Tull explained.
The machine could take an ETF like the Goldman Sachs ActiveBeta U.S. Large Cap Equity ETF (GSLC) and optimize it to find the best allocations into stocks.
“I don’t pick the stocks. What we’re doing is using all the data from all the smart beta ETFs, and we’re trying to build the smartest of all the smart baby ETFs, using this technology,” Tull continued.
ETF veterans like Dave Nadig of ETF.com agree that AI seems to hold a lot of promise.
“I think Bob is really at the cutting edge,” said Nadig. “This is the next generation of frankly, financial product development. Machine learning sounds big and scary, but all it is really just taking data and things you already know how things perform, to generate rules, as opposed to hiring a bunch of CFAs to come up with those rules about what you’re going to buy and sell, based upon fundamentals. AIEQ (AI Powered Equity ETF) has done quite well performance wise. It shown this can happen. I sort of see that as the 1.0 of of this type a strategy. Hedge funds up-and-down the Connecticut coast are using this. Bob’s ideas are going to be the next generation of ETFs.”
Still, some experts are skeptical.
“I don’t understand it so I’m a little bit suspect of it. I think I’d want to dig into the research before I have a view on it per se,” said John Davi, founder and chief investment officer of Astoria Portfolio Advisors. But he added, “I like the idea of systematic, rules-based investing using a lot of data.
For more market trends, visit ETF Trends.