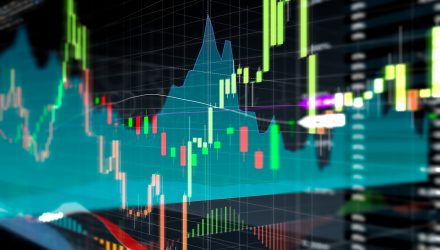 However, a nearly complete opposite situation transpires when the market isn’t roaring higher. In 80 of the 104 times that the S&P 500 gained less than 10% for the rolling three-year return, active managers outperformed their passive counterparts. This is good enough for a 77% win rate, a level that is just as impressive as passive’s dominance in bull market environments.

However, in an interesting twist, active’s outperformance is by no means relegated to a specific market environment as we saw with passive’s near total dominance in extreme bull runs. Active managers have been able to add value relative to the benchmark in a number of situations ranging from double-digit percentage declines to modest gains.

In both scenarios, part of this could be due to active managers’ ability to avoid the worst performers in a given time frame which could potentially allow for outperformance in sluggish market conditions. Indeed, active managers appear to have done the best, at least in the past, relative to indexes during the worst conditions, rarely lagging by any significant amount during the steepest declines. Avoiding the worst isn’t quite as useful during broadly positive conditions, potentially explaining active’s underperformance during better market environments.

There is no one investing style that is superior. Different market environments tend to be better for certain strategies. And while past performance is by no means a guarantee of future returns, it does appear as if active management has a better chance of adding value during sluggish conditions, while pure bull markets have tilted towards passive.

I would argue that this is primarily from active managers’ nimbleness in avoiding the worst names during the most difficult market environments, as well as their apparent lack of ability to tilt towards the best performers during the most bullish periods in the market. Either way, it shows that in the active vs. passive debate, the likely winner really depends on the market environment more than anything.