You are at:Home»Smart Beta Channel»5 Smart Beta ETF Picks For 2018 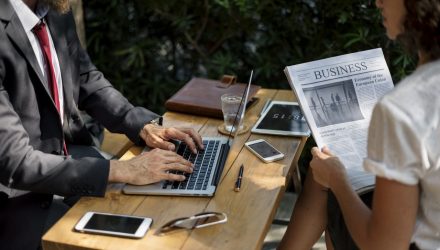 If there’s one easy to prediction to make for 2018, it’s that the ETF will continue raking in billions of dollars in net flows. In 2017, U.S. listed ETFs will take in just short of $500 billion, mostly at the expense of the mutual fund industry and higher cost actively managed products. Low costs have been a key driver of the massive growth in ETFs, but so has the emergence of so-called “smart beta” products, funds that essentially combine the better features of both passive and active strategies, and have allowed easy investment in just about any segment of the market imaginable.

While most investor money is likely go into the biggest and cheapest ETFs, the biggest winners of 2018 are likely to come out of the smart beta space. 2017 was the year that you could make money by investing in just about anything, but I think investors will need to be more selective in 2018 to generate returns. The stock market rode the wave of low interest rates, strong year-over-year earnings growth and corporate tax reform to 20% gains in the S&P 500 (SPY), the 9th year in a row of positive returns. Given that they expect the wave to continue, several analysts are already making calls for 3000 on the S&P 500, but I’m more on the cautious side. In my “Positions for 2018” piece on Seeking Alpha, I called for a 4% total return on the S&P 500, which would work out to a price target of around 2750.

Why am I on the low end of expectations? Interest rates and volatility mainly. Higher valuations can be justified if you’ve got an economy that is roaring right along coupled with low interest rates. But we’re looking at three, maybe even four, rate hikes in 2018. If that happens, in theory, then valuations should start to contract, and investors may begin looking for bargains instead of growth stories. I’m also concerned about how investors will handle a sustained uptick in volatility. The VIX has been under 12 for most of the year, which means investors have enjoyed a slow, steady march higher. When volatility picks up, are some of those investors, who wanted to get in so they didn’t miss out on further gains, going to get spooked and head for the exits? Will those billions of dollars in equity ETF flows start to slow or even turn negative? The answer to the latter is probably no, but we’re not sure yet about the former or how it could impact the markets.

With that being said, here are my five smart beta ETFs to position yourself for this and other trends as we head into 2018.

If you believe, like I do, that value will outperform growth and momentum in 2018, it’s best to stick with a fund that employs a broad value-based strategy at a really low cost. Value can be defined many ways, but this ETF uses a more traditional definition by looking at metrics, such as price/earnings, price/book and price/sales, as well as dividend yield. What you end up with is a fund that carries a P/E of around 20, compared to 23 for the broader S&P 500, and a yield of nearly 2.4%.

We’ve seen the beginnings of a potential switch from growth to value already. Over the past month, the Vanguard Value ETF has returned 5%, compared to a 1.6% return for the Vanguard Growth ETF (VUG). Over the same time frame, the iShares Edge MSCI USA Value Factor ETF (VLUE) has performed best out of the four major factors, while the Momentum Factor ETF (MTUM), the undisputed leader for 2017 as a whole, came in last.

This fund is my top pick for 2018. Emerging markets have delivered 30%+ returns in 2017, but most signs still point to the notion that there’s further room to run. Much like in the United States, growth outperformed value, and left many of the more mature companies lagging the broader benchmarks. Valuations still look appealing, the iShares MSCI Emerging Markets ETF (EEM) has a P/E of 16, but the large-cap dividend payers look even more attractive. The High Dividend ETF, which plucks roughly the top ⅓ of companies by annual cash dividends paid, has a forward P/E ratio of just 9, while paying a dividend yield of nearly 4%.

After three years of negative returns, the macro environment for emerging markets finally looks much improved. Economic growth, as a whole worldwide, is looking good, while corporate earnings growth is looking stronger. This could very well be a case where total returns are boosted both by earnings growth and multiple expansion.

If you were to poll analysts for their top sector pick for 2018, the winner would likely be the financial sector (and it probably wouldn’t be that close). Banks should be able to translate higher interest rates into higher interest income. Plus, they’re also one of the more highly taxed sectors in the economy so they should be particular beneficiaries of the recent tax reform package. Within this group, I favor the regional banks over the big banks, since they should experience the benefits of government action quicker and on a greater relative basis than the big banks, who have other revenue streams, such as trading and investment banking, to also consider.

The possible downside to this pick? The benefits could already be priced in. The sheer number of folks jumping on the financial sector bandwagon could actually end up being a contrarian indicator. Still, I like the regional banks’ relative valuation and how they are positioned.

This ETF is a play on the recent corporate tax reform legislation. The “fallen angels” are bonds that were rated investment-grade at the time of their issuance, but have since been downgraded to junk status. The managers of this fund seek out bonds that they feel have a good chance of being upgraded back to investment-grade status. A new lower corporate tax rate could improve balance sheet strength and the underlying credit quality of the issuers. Roughly half of the portfolio is invested in the beaten down energy and materials sectors, two areas of the market that could be prime rebound candidates in 2018.

The Alternative Harvest ETF is better known as the Marijuana ETF, a fund that launched just earlier this month (well, sort of). It’s the first marijuana ETF that is traded on a major U.S. exchange (although there are other products that trade elsewhere).

Disclosure: I am long DEM, MJX.