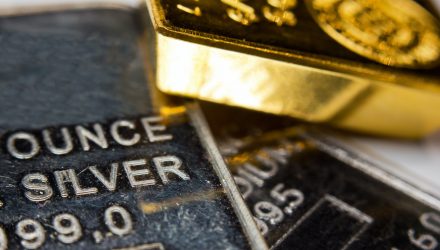 After a month-long consolidation, silver has finally broken out of its formation and is driving furiously higher on Tuesday, lifting precious metals ETFs. The industrial metal is up more than 6.63% so far Tuesday.

Gold and silver prices are dramatically higher in afternoon U.S. trading Tuesday. Gold prices pushed to a new nearly nine-year high, while silver is strongly up again today and hit a six-year high. There continues to be a steady (and now and increasing) flow of safe-haven and technically related buying in the two precious metals, which is likely to push prices still higher in the near term. August gold futures were last up $23.60 an ounce at $1,841.10. September Comex silver prices were last up $1.228 at $21.42 an ounce.

The  iShares Silver Trust (SLV) and the Aberdeen Standard Physical Silver Shares ETF (SIVR) are suddenly hot as both silver ETFs are higher by more than 14% over the past month amid the industrial metal’s moves. Meanwhile, gold ETFs are climbing as well, with the Direxion Daily Gold Miners Bull 3X ETF (NYSEArca: NUGT) advancing nearly 4%.

In a report Tuesday from Commerzbank, the analysts said that silver has seen a significant rally since hitting an 11-year low in March as a result of market volatility generated by the coronavirus pandemic. They noted that prices have climbed over 70% from their low. September silver futures last traded at $21.52 an ounce, after reaching as high as $21.63 earlier in the session.

“Silver has therefore outshone gold significantly, as the latter has risen by 24% as compared with its March low,” the analysts said. “As with gold, silver’s upswing has been driven almost exclusively by robust investment demand.”

The silver market is also set to beat gold’s performance for the year, as silver prices are now up over 26% in 2020. Meanwhile, gold prices have climbed 21% for the year, with August gold futures trading around $1,843 an ounce, their highest level in nearly a decade.

The analysts at Commerzbank claimed that speculative interest in the precious metal will continue to spur silver prices.

“According to the CFTC’s statistics, they had already expanded their net long positions to a five-month high in the last reporting week. They are likely to be even higher by now,” the analysts said.

The rally in silver has pushed the carefully watched gold-silver ratio to its lowest level since March, where it recently traded near 87.29 points.