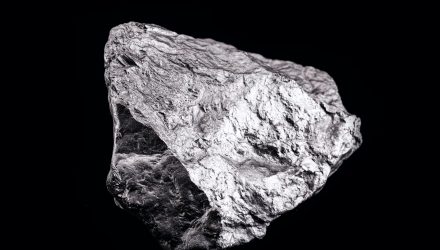 Silver ETFs Pull Back After 20% Rally In December

After finding support near the $22 per ounce level late last month, silver rallied more than 20% throughout December to reach over $27.50, before pulling back to the $25 area on Tuesday.

The industrial metal is down over 3.29% on Tuesday, dragging down the iShares Silver Trust (SLV) a similar percentage, as the holiday week continues, but could present an opportunity for precious metals buyers who foresee a run higher.

“The market has recently broken out of a four dollar range, and therefore it would extrapolate towards a move near the $32 level. Obviously, there are a lot of resistance areas between here and there, so that is a longer-term call more than anything else,” Lewis wrote.

Silver markets have been very volatile during the trading session on Tuesday as a result of anemic holiday volume, as investors prepare to take time off. Such thin volume frequently generates dramatic swings in both directions, as there are no major players to stabilize the market.

Investors and traders are still smarting from the precarious news that a new and more contagious strain of the coronavirus emerged in the U.K. The new variant has prompted a plethora of European countries to institute more stringent travel restrictions on visitors from the U.K., while leader like New York Governor Andrew Cuomo is asking for the U.S. to do the same.

Although scientists say there is no evidence that the new Covid strain is more virulent, Prime Minister Boris Johnson claimed it could be up to 70% more contagious than others, and the health secretary explained it was “getting out of control.”

As a result of the new strain, at least 40 countries including the entire European Union and Canada have halted incoming travel from the U.K. for the time being.

Health pundits, including the World Health Organization, feel that the current vaccines from Pfizer and Moderna will be effective against both strains, which should allow the stabilization of markets.