You are at:Home»Featured»Silver ETFs Gain As Analysts Predict Significant 2020 For Metal 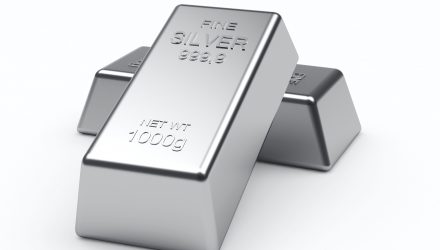 Silver is up over 1% on Wednesday, after falling steeply in the prior session. The industrial metal found support near the $22 per ounce level late last month and climbing more than 20% throughout December to reach over $27.50.

The iShares Silver Trust (SLV) gained 1.71% as the holiday week continues and could present an opportunity for precious metals buyers who foresee a run higher, which some analysts are now touting as likely.

Earlier this month, Saxo Bank released its annual Outrageous Prediction report, which included silver in the commodities section. In a headline-grabbing prediction, the bank predicts silver prices could target their all-time highs around $50 in 2021.

Saxo Bank’s renewed emphasis on silver arrives as prices continue to beat gold heading into the new year, with the March silver futures last traded at $25.76, up 0.88% on the day and more than doubling since their march lows of $12 per ounce, when coronavirus fears gripped the market.

Hansen, the head of commodity strategy at the Danish bank, said in a telephone interview with Kitco News that while he is bullish on silver for 2021, his prediction in the bank’s outlook could be excessive. He cites industrial and green applications as a reason for the metal to rise.

“Turbocharging the rise in the silver price in 2021, even relative to gold, is the rapidly rising demand for silver in industrial applications, especially those driving the green transformation such as photovoltaic cells used in solar panel production,” he said in his report. “In fact, a real silver supply crunch is in the cards in 2021, and it frustrates the full-throttle political support for solar energy investments under a Biden presidency, the European Green Deal, and China’s 2060 carbon-neutral goal, among other initiatives.”

Hansen added that if investors want to see where silver is going, they could look at base metals such as copper, which is trading near its eight-year high, as a proxy.

“The market has recently broken out of a four dollar range, and therefore it would extrapolate towards a move near the $32 level. Obviously, there are many resistance areas between here and there, so that is a longer-term call more than anything else,” Lewis wrote.

Silver markets have been very volatile during the trading session recently due to anemic holiday volume, as investors prepare to take time off. Such a thin volume frequently generates dramatic swings in both directions, as there are no major players to stabilize the market.