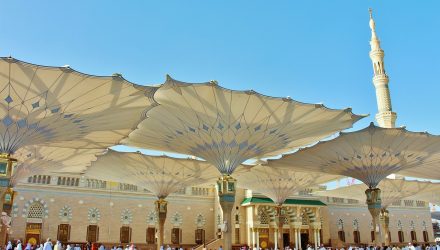 Saudi Arabia ETFs climbed Tuesday on the potentially reduced risk of U.S. punitive action as the kingdom may acknowledge journalist Jamal Khashoggi disappeared due to a botched investigation.

Saudi Arabia markets strengthened amid speculation funds tied to the government could be buying and diminished risk of U.S. action after media outlets in the U.S. said the kingdom is prepping a report that states the writer died due to an unsanctioned and mishandled interrogation, Bloomberg reports.

Riyadh has denied accusations that it murdered the columnist and began its own investigation. Meanwhile, U.S. Secretary of State Michael Pompeo visited Saudi Arabia to discuss Khashoggi.

The benchmark Tadawul All Share Index weakened earlier in the week on concerns the country’s relationship with the U.S. could be damaged due to the disappearance. However, Saudi Arabia’s market jumped as some analysts speculated that government-related funds were supporting the securities.

“There is no transparency in the stock market, and it is difficult to say who is supporting the market at the moment,” Naeem Aslam, the chief market analyst at Think Markets UK, told Bloomberg. “But under these circumstances, it is highly likely that funds tied to the government would intervene to restore confidence — which is a rare commodity now.”