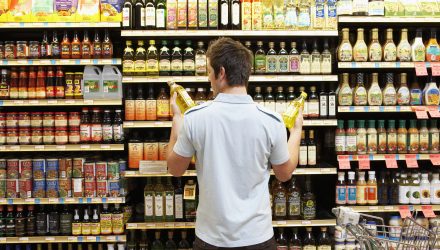 A Safe Sector Could be Exciting Into Year-End

The Consumer Staples Select SPDR (NYSEArca: XLP), the largest ETF tracking the consumer staples sector, jumped about 2% and some market observers believe the usually slow-moving sector can continue surging into the end of this year.

The combination of the expected interest rate hikes by the Federal Reserve and a stronger dollar were seen as potential drags on rate-sensitive consumer staples companies that derive significant portions of their revenue from ex-US markets. Amid fears of rising interest rates and concerns that the sector is overvalued even relative to its lofty historical norms, the consumer staples sector has recently encountered some headwinds.

Consumer staples is viewed as a rate-sensitive sector and the Federal Reserve is widely expected to boost borrowing costs at its December. However, market observers believe if the U.S. dollar does rebound, that increase will be gradual. XLP is up just 8.3% year-to-date, less than half the 17.3% returned by the S&P 500.

“Consumer staples has outperformed recently, rallying more than 3 percent this month, making it the second-best-performing sector. The sector got a boost this week from a string of positive news out of some names such as Wal-Mart,” reports CNBC.

Dow component Wal-Mart is usually one of the largest holdings in cap-weighted consumer staples ETFs, such as XLP.

“Larry McDonald, founder of the Bear Traps Report investment newsletter, expects the upside for the group will likely continue, particularly over the next 6 months, as value stocks fall back into favor and volatility picks up,” according to CNBC.