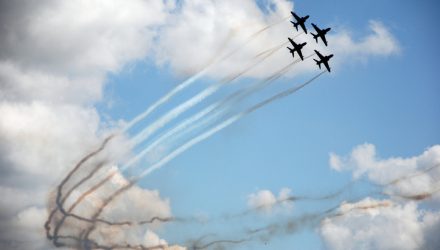 Following Pyongyang’s threats and President Donald Trump’s pledge to bring “fire and fury” on North Korea, aerospace and defense sector-related exchange traded funds are coming back under the spotlight as a Trump play.

Despite geopolitical risks weighing on the markets, many are putting a renewed focus on the aerospace and defense industry as a means to play Trump’s more hawkish rhetoric and plans to expand U.S. military operations. For instance, the White House has proposed a nearly 10% hike in the military budget to $603 billion for the fiscal 2018 year in February.

“This budget will be a public safety and national security budget,” Trump in late February, calling for a “historic increase in defense spending to rebuild the depleted military of the United States of America at a time we most need it.”

The latest round of saber rattling has fueled the outlook on defense spending after North Korea promised to “turn the U.S. mainland into the theater of a nuclear war” at the first sign of U.S. aggression and Trump’s threat of “fire, fury and frankly power the likes of which this world has never seen before.”