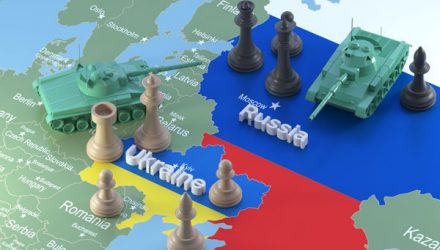 Will he, or won’t he? That’s the question many people have been asking of Russian president Vladimir Putin with regard to a possible invasion of Ukraine.

For what it’s worth, I believe such a move is unlikely, seeing as Russia stands to lose a lot even if it were to stage a “successful” invasion and somehow annex all or part of its neighbor. I’ll elaborate further, but for now I’ll say that the financial sanctions alone would be crippling.

What I do know is that tensions have created what I believe is an attractive entry point for Russian stocks, which were gaining nicely before Russian troops were positioned on the Ukrainian border in late October 2021. The dollar-denominated RTS Index, which tracks 50 of the most liquid Russian large-caps, lost approximately a third of its value before recovering somewhat on higher energy prices. The Case For Russia: Attractive Valuations And Dividends

We like Eastern European equities, and Russian in particular, for a number of reasons. Two big ones immediately come to mind, though: 1) They’re incredibly cheap relative to other markets, and 2) They offer some of the highest dividend yields to be found today.

Let’s look at valuations. According to Hasnain Malik, head of strategy and equity research at Tellimer Research, Russian stocks currently have a forward price-to-earnings (PE) ratio of below 5 times earnings, an attractive 25% discount below their five-year median. By comparison, the S&P 500 has a forward PE of about 20 times earnings. Russia’s 5x is in line with previous troughs that were seen after global shocks (the financial crisis, oil price collapse in 2014) as well as local ones (2008 war with Georgia, 2014 annexation of Crimea), Malik adds.

And then there are the dividends. I believe they’re among the highest in the world right now. Below is just a sample of the amazing yields offered by companies we like:

I should also point out that, while Russia is a complicated jurisdiction politically, it’s nevertheless managed with enviable monetary and fiscal discipline. Its national debt is below 20% of its gross domestic product (GDP), which is almost unbelievable in today’s environment of nonstop out-of-control spending and money printing. As of right now, U.S. national debt stands at over $30 trillion, or about 125% of GDP.

And with the U.S. yet to raise rates to control inflation, the Bank of Russia is in the middle of a tightening cycle that began in April of last year. On Friday of last week, the bank raised its key interest rate to 9.5%, an increase of 100 basis points. As a result, the real 10-year government bond yield is above 1%, making it one of the very few countries to offer positive yields even after adjusting for inflation. An Invasion Is Possible But Doubtful

I want to reiterate my point from earlier about the (un)likelihood of invasion. Putin is many things, but he’s no dummy. Military action would be incredibly costly for Moscow, not just monetarily but politically.

For one, it’s likely Russia would be shut out of SWIFT (Society for Worldwide Interbank Financial Telecommunication), the international payment and money transferring network. Although other payment systems now exist, from Visa to Mastercard to Bitcoin, most cross-border commerce between countries is still conducted via SWIFT. This means a shut-out could be devastating for Russia, which depends heavily on energy exports.

That’s just one of many pressure points on the table, another being Nord Stream 2. The just-completed Russia-owned pipeline to Germany has yet to transport any gas, and it could very well stay that way if Putin invades.

The president knows all of this, of course. Although anything could happen, I fully expect cooler heads to prevail, which is good news for investors who were waiting for such a time to get exposure to the Russian market.

Explore the 10 most beautiful cities in Eastern Europe by clicking here!

The RTS Index is a capitalization-weighted composite index calculated based on prices of the most liquid Russian stocks of the largest and dynamically developing Russian issuers with economic activities related to the main sectors of the Russian economy presented on the Exchange. The S&P 500 is a stock market index that tracks the stocks of 500 large-cap U.S. companies.

Forward P/E is a version of the ratio of price-to-earnings that uses forecasted earnings for the P/E calculation. Because forward P/E uses estimated earnings per share (EPS), it may produce incorrect or biased results if actual earnings prove to be different. A basis point, or bp, is a common unit of measure for interest rates and other percentages in finance. One basis point is equal to 1/100th of 1%, or 0.01% (0.0001). There is no guarantee that the issuers of any securities will declare dividends in the future or that, if declared, will remain at current levels or increase over time.