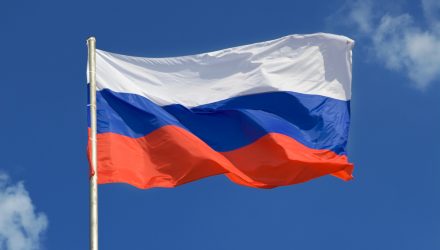 Russia country-specific exchange traded funds reflected some of the better performing areas of the market on Monday after the ruble rebounded off a seven-month low and the oil supply outlook stabilized.

The Russian ruble strengthened on Monday after sliding to a seven-month low on Friday after swinging oil prices, geopolitical risk, and the COVID-19 Omicron variant weighed on risk and the demand outlook, Reuters reports.

The ruble strengthened to 74.58 against the U.S. dollar.

“The rouble will stabilise around 75 per dollar for now, but in the coming days it has every chance of approaching 74 to the dollar as the geopolitical environment remains relatively calm,” Sberbank CIB said in a note.

Investors previously pulled out of Russian markets on Western concerns about a potential Russia-led military incursion into Ukraine.

Some experts also played down the severity of the new Omicron variant, which helped markets turn positive on Monday, Sberbank CIB added. Russia stated that its Sputnik V vaccine could fend off the new strain and hundreds of millions of booster shots will be ready.

“The risk trade has again come under siege by the COVID-19 clan … fears are that the strain will trigger new broader lockdowns that derail the global economic recovery,” BCS Global Markets said in a note.

Meanwhile, the Organization of Petroleum Exporting Countries, along with its allies like Russia, or OPEC+, will not be adjusting its output policy this week, according to Reuters.

Russian Deputy Prime Minister Alexander Novak stated that there was no need for urgent action on oil over the rise of Omicron, downplaying the outlook to an OPEC+ oil supply deal this week.