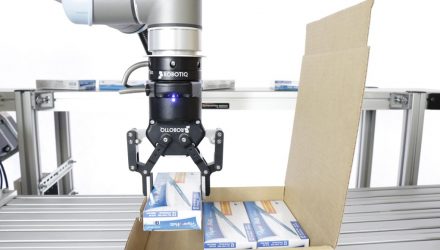 It’s an exciting time for robotic logistics. Read on to find out about the surge of new applications!

The modern logistics industry is becoming a hub for exciting robotic applications. It was slow to adopt automation at first, but the last few years have seen a rise in robotic solutions to logistics problems. According to Machine Handling and Logistics, “Some of the largest [logistics]operators in the US have plans to automate almost every physical move in their facilities within the next two to three years.”

These applications range from (somewhat mundane) palletizing tasks all the way up to self-driving trucks and delivery drones.

Here are ten of the most interesting emerging applications in autonomous logistics today.

Related: What Does the Future Hold for Artificial Intelligence?

One of the most mature robotic technologies in logistics is autonomous warehousing. Since Amazon acquired Kiva Systems in 2012, robotic warehouses have grown in popularity. They reduce the time that workers spend traveling around the warehouse by having robots bring shelves to the workers instead.

Although Amazon was one of the first big businesses on the scene, their robotic warehouses certainly aren’t the only ones. In May 2018, logistics giant Rakuten Super Logistics partnered with InVia Robotics to automate their US warehouses, and more partnerships are surely on the way.

Most warehousing robots these days work by bringing shelves to human workers, who then pick items by hand. However, more and more robots are able to pick items from static shelves without human assistance. This involves grasping diversely shaped items—a complex task. It would be great for logistics companies if all robots were capable of this, which is why Amazon hosts its annual Picking Challenge.

For more information, see our article on how to use robot vision to improve picking applications.

Packing is one of the most common logistics tasks—after all, everything shipped must be packed. Robots can be used for many of the several steps in packaging. At first, products are packed into individual packages. This is often done by the manufacturer. The next two steps are additional packing into larger boxes and crates; the latter step, called tertiary packaging, is often carried out by the logistics company.

For examples from the food industry, see Top 7 Robotic Applications in Food Packaging.