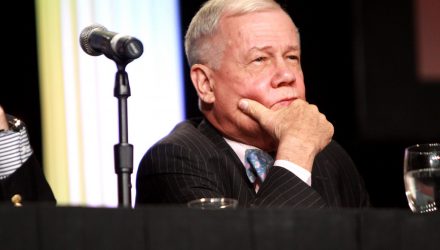 Legendary investor, businessman and author Jim Rogers launched an artificial intelligence-focused ETF on Thursday, the Rogers AI Global Macro ETF (NYSEArca: BIKR). BIKR derives itself from an index that tracks a model developed by Rogers and his team at Ocean Capital Advisors that utilizes machine learning to pore over world economic data.

“The internet and artificial intelligence are changing and have changed everything we know including finance and investing; Ocean’s new ETF is part of the same trend,” said Rogers in a statement. “I hope we get it right. We will all be extremely pleased someday if we do.”

The ETF will focus primarily on U.S.-listed single-country ETFs and will rebalance monthly based on the analysis performed by the machine learning technology.

Rogers was a co-founder of the Quantum Fund with George Soros in 1973, which outperformed the S&P 500 by over 4,000 percent. Rogers also launched the Rogers International Commodity Index in 1998, which represents the value of a basket of commodities consumed in the global economy, ranging from agricultural to energy and metals products.