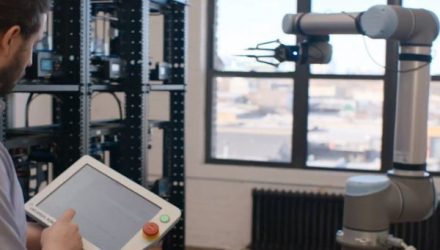 Is Robotics Really a Disruptive Technology?

Addition of a collaborative robot to tend 3D printers without changing the existing process.

“Disruptive technology.” It’s one of the buzzwords of the modern world, isn’t it? Blockchain, Autonomous vehicles, the Internet of Things, they’re all accused of being disruptive technologies. Robotics is often listed alongside them.

But, is robotics really a disruptive technology?

Does the definition of a disruptive technology really apply to robotics?

Or has everyone got it wrong?

There are two possible answers:

In this article, we’ll present these two options. You can then decide for yourself if you should be worried about the disruption that robotics could cause to your business.

The Background: What is Disruption?

First, it’s probably a good idea to define our terms here. What is a disruptive technology?

According to Investopedia, disruptive technologies “are those that significantly alter the way businesses or entire industries operate. Often times, these technologies force companies to alter the way they approach their business, or risk losing market share or becoming irrelevant.”

Many authorities consider robotics to be a disruptive technology. For example, the United Nations Global Compact — a world-leading sustainability initiative — lists Next Generation Robotics as one of the main disruptive technologies of the modern world. Under this umbrella, it includes technologies like advanced manufacturing robotics, exoskeletons, and medical robots.

Why Does the Definition Matter?

You might think that it’s not important whether we define robotics as a disruptive technology or not. You might be right. But, if a new technology is disruptive, it can have an effect on the strategies we use to adopt that technology.

Disruptive innovations are often “all or nothing.” They often involve high risk and high uncertainty. This is why small companies (e.g. Uber, Airbnb, Netflix) tend to drive the wider adoption of disruptive technologies. Unlike larger, established companies they have less to lose if it all goes wrong.

Incremental innovations (the alternative) involve continually making small changes to products and services to make them better. This is a much less uncertain route but it has a risk of being beaten by companies who are willing to take the risk of disruptive technologies.

Which is better for your business? Disruptive or incremental? This decision is what marketer Ben Gross calls The Corporate Dilemma.

If robotics is a disruptive technology, it could affect how risky it is to adopt robots into a business.

The 2 Options: Is Robotics Really a Disruptive Technology?

It’s time to present the two points of view. Is robotics a disruptive technology, or not? You can decide for yourself.

The first option is that robotics is disruptive.

A few years ago, I was talking to an elderly woman in Spain. When I told her I worked in robotics, she began a long and impassioned story about the arrival of robots to Spanish car factories in the last century. She mourned the huge loss of jobs and the many lives that the robots had ruined.