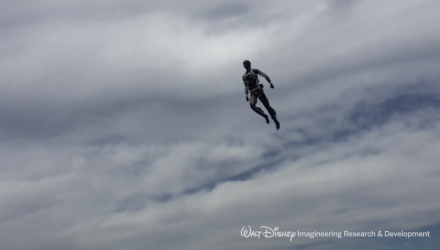 Disney’s Imagineers have released new video showing off their latest robot invention: Stuntronics. The humanesque robots perform aerial flips and tricks, all while using onboard sensors to make decisions in the moment prior to landing. The footage also shows the 90-pound robot making superhero poses mid-flight.

A blog post by the company states that, “It knows when to tuck its knees to perform a somersault, when to pull its arms to twist, and even when to slow down its spin to make sure it sticks that perfect landing.” With theme parks distinguished by unique and lifelike robotic attractions, the possibilities seem endless for future of Disney’s Stuntronics performers.