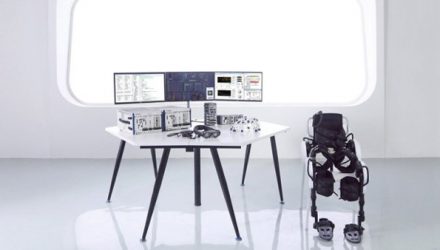 A Beginners Guide to the Exoskeleton Industry

Robotiq February 13, 2019
by Alex Owen-Hill
The exoskeleton industry is predicted to be the “next big thing.” But, why are we not seeing them in businesses? Here’s the lowdown on this industry of the future.

If you read robotics news as often as we do here at Robotiq, you might have noticed that there are a lot of stories about exoskeletons at the moment. We hear about new exoskeletons and fundings of exoskeleton startups quite often.

The exoskeleton industry has been tipped as “soon to be huge” for some years now, but it’s never really taken off as explosively as people had predicted. However, it has still been growing and looks set to continue (much like the cobot industry, as we heard in our last RUC conference).

Despite its slow growth, it is an industry that we should all keep an eye on. It seems almost certain that exoskeletons will be part of our future. Here’s the lowdown on the industry and how it’s relevant to us.

What is an Exoskeleton?

The word exoskeleton comes from name of the rigid, external skin of invertebrate animals (bugs, spiders, crabs, etc) which allows their body to keep its form without an internal skeleton.

In robotics, exoskeletons are essentially wearable robots. They attach to the outside of your body like a skin and provide extra power to the normal movement of your muscles. They range from suits which simply support to your muscles a little (e.g. for rehabilitation) all the way up to suits which allow you lift heavy weights with very little effort.

There are a huge number of different exoskeletons, too many to list here. Here are the common ways that exoskeletons are categorized in the industry.

There are also a range of different application areas, each of which has different requirements for what it would need from an exoskeleton. For example, rehabilitation applications are more suited to soft, low-power devices which support and develop the natural muscle use of the wearer. On the other hand, military and construction applications would want high-powered exoskeletons to augment the strength of the wearer.

The State of the Exoskeleton Industry

There have been a stream of industry reports about exoskeleton markets recently. The global market is expected to reach $8.3 billion by 2025, or only $2.5 billion by 2025 depending on which prediction you believe. Also, the military exoskeleton industry anticipates growth thanks to increased interest by China and India.

Despite these lofty predictions, the exoskeleton industry has so far failed to take hold, as a recent article in Singularity Hub explained. Small successes in rehabilitation exoskeletons have not yet led to wider adoption of the technologies in industry. However, two developments this year suggest that exoskeletons could be about to make a significant entrance into the automotive industry.