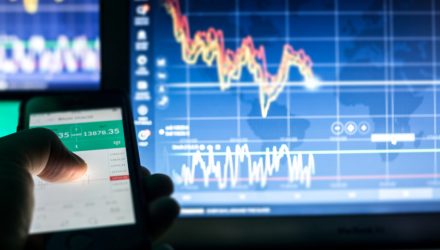 There’s been quite a bit of buzz in the financial press about the rise of retail investors, and in particular, Robinhood.  If you’ve been living under a rock, Robinhood is daytrading for the Tinder generation.  It’s a relatively small retail brokerage that allows you to “swipe up” to buy stocks (or cryptocurrencies).  It’s very slick, it’s got a great interface, and it genuinely encourages folks to make rash decisions easily (like I said, Tinder for the market). It’s very good at what it does.

The controversy about “Robinhood Traders” really stems from two different places. Let’s get rid of the easy one first:

This is the first big teeth-sucking, hand-wringing argument, and is the source of many headlines. The narrative is simple: people are trapped at home, there are no sports on TV, and people want the excitement of doing something.  So taking a punt on a few stocks or ETFs through an always-on-your-phone app along with a vast community of like-minded “what the heckers” is filling the gap.  And somehow, all these single share trades and $1,000 fliers are moving the market to huge swings we’ve never seen day after day.

First and foremost, I just don’t buy it.  While there may be a lot of noise about retail pajama traders, we know mathematically they just can’t be moving the volumes we’ve seen.  It almost doesn’t matter how you slice it, daily retail trading is just not a big dollar.  Depending on the study you read, individuals trading stocks and ETFs represent somewhere between 2% and 10% of each day’s volume. So the idea that somehow the irrational markets we’ve seen lately are the result of Dave Portnoy and his followers is, well, just silly.  (A much better reason is that institutions don’t have any choices for their investment dollars.  What are you going to do, buy treasuries?)

Secondly, the whole “daytraders are bad” shtick is really old.  It was old in the late ’80s.  It was old in the late ’90s, and it’s old now.  Perhaps the headlines about daytraders signal tops, maybe they don’t.  But honestly, if people want to gamble, I’m not sure I think it’s the regulator’s job to stop them.  Robinhood (and Schwab, and Merrill, and Fidelity, and Interactive Brokers) follows the rules, discloses risks, makes people sign the paperwork, etc.   If people want to buy stocks on margin, they can get themselves in trouble, but honestly, this is all disclosed, and sometimes people are going to do dumb stuff with their money.  That’s true in casinos, real estate, sports cars, and yes, daytrading.  But it’s not somehow immoral, nor is it breaking the market.

This is the one where people seem to be getting twisted up, and it gets right to the heart of how trading actually happens, so this is one worth really clearing up.  Let’s just start with how you, a rational investor or advisor, who’s investing for the long term, put money to work.

You have about $10,000 you want to allocate to, say, technology stocks.  So you go to your Schwab account and punch “XLK” (the Technology Select Sector SPDR) into the trade screen.

But sometimes what you’ll get back is a little more complicated.  Sometimes you might get back a confirm for 50 shares at 102.65 and 50 shares at 102.645.  That’s called “price improvement.”  All that happened is that when Schwab posted your order, someone (a market maker) swooped in and grabbed part of your order at a better price.  Why would they do that? Because they likely were able to simultaneously buy those shares from someone else for just a fraction of a cent less.  That’s what market makers do – buy and sell as fast as possible to earn the spread.  So while the “advertised” spread here is a penny, in fact, market makers compete inside the spread as well.

But market makers also make money by providing liquidity.  That phrase gets bandied about a lot, but what it really means is: they get paid for keeping advertised prices up, in the form of limit orders in the limit-order-book.  If they are sitting out there with those 1600 shares to sell for 102.65, and someone goes ahead and executes a limit order against that best ask, then the exchange will pay them a very very small, sub-penny amount, for “making” something liquid. Conversely, firms that use market orders to “hit” the book get charged a tiny amount for “taking” liquidity.  This is what’s known as a “maker/taker” market making system.  Believe it or not, this is a gross, gross simplification.  The NYSE’s fee and rebate schedule is 40 pages of fine print, and exchanges compete with each other to try and attract liquidity by constantly tweaking these fees and rebates. (As a side note, this whole part of the ecosystem is fascinating and the subject of some of the best academic work being done in the past decade.  Here’s a sample: 1, 2, 3, 4, 5).

All of this is to say: market makers want to see as many orders as humanly possible because every order is an opportunity to make some money. Because of this, market makers (like Citadel Securities) will pay brokers (who collect all the orders from their clients) when they get an order. Most brokerage firms take these payments as a source of revenue, and it’s part of why zero commission stock and ETF trading is possible.  Fidelity makes a bit of a big deal about being the only retail broker not accepting these payments. Still, they have their ways of making money: they cross internal order flow against large institutions, and Schwab and Fidelity have had some quite public tiffs about this.

So should you care?

Honestly, I think this is a bit of a tempest in a teapot.  In my example above, a theoretical half cent improvement from 102.65 to 102.645 is fifty cents total on my $10,000 trade.  I’m much more likely to lose a penny or two by merely mistiming the trade by a few seconds.  If my holding period is measured in anything but hours, it’s a genuinely irrelevant amount of money.  Even if a supersized this trade to 10,000 shares, it’s $50 of my new million dollar position.

But what if you’re a Robinhood daytrader?  Well, here I can at least understand why folks are concerned.  As slick as Robinhood is, they don’t publish the same level of data around price improvement or provide much transparency in how they specifically route orders. They publish the regulatorily required disclosure paperwork that shows where they send their orders and how much they receive. Still, I’ve yet to see a broad release about their actual execution quality. (I haven’t seen a price improvement in the few trades I’ve made at Robinhood, but maybe it happens). Assuming the worst-case scenario, then yes, for any individual trade, it’s possible that some small amount of price improvement was “left on the table” vs. executing the same order at a more traditional broker.

But again, how much should you really care?  In direct proportion to how short your time horizon is, and how large your trades are.  If you’re making a few trades here and there for fun with a few thousand dollars, then the convenience and experience of being with Robinhood probably overwhelm the real costs here (pennies).  If, however, you’re daytrading a million-dollar account? Sure, I guess you should care.  But you also shouldn’t be running a trading business off your phone.  You should be investing in high-quality real-time tools, like those available from, well, just about all of Robinhood’s competitors.

Heinlein had it right: TANSTAAFL – There AIn’t No Such Thing As A Free Lunch.  But that doesn’t mean it’s somehow illegal, immoral, or dangerous for someone to shift the market dynamics to appeal to a new customer base.  And along the way, those of us who are not daytrading, but instead focused on the long term, get the benefit of outrageously cheap and efficient liquidity when we do have a position to adjust.