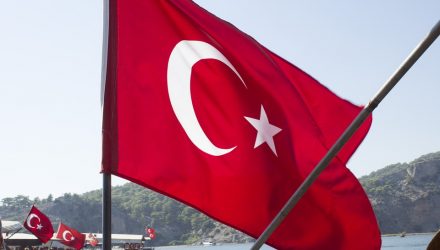 While Turkey’s economic woes continued to ravage the country’s economy, Treasury yields gained in the United States with the benchmark 10-year yield rising to 2.88, flirting with 3% yield rates.

All the benchmark yields gained across the board, including the 30-year rising to 3.046, the 5-year ticking higher to 2.752 and the short-term 2-year is now at 2.621. Elsewhere in the capital markets, the Dow Jones Industrial average continued its 200-point drop last Friday, but with a fractional 40-point drop as of 11:45 a.m. ET.

This week, the U.S. Department of Treasury is scheduled to auction $51 billion in 13-week bills as well as $45 billion in 26-week bills. The size of a four-week bill, set for auction on Tuesday, will also be announced.

Meanwhile, the focus remained on Turkey as the geopolitical turmoil gave the local currency no reprieve hitting an all-time low of 7.24 against the U.S. dollar. In an effort to prop up the currency, the Turkish central bank lowered the reserve requirement for banks by 250 basis points.

Compounding the issues was U.S. President Donald Trump announcing that he would double tariffs on steel and aluminum, which further hampered the Turkish lira. The situation reached dire straits as Turkish President Recep Tayyip Erdogan went as far as asking citizens to convert their dollars and other foreign currencies, including gold to Turkish lira.