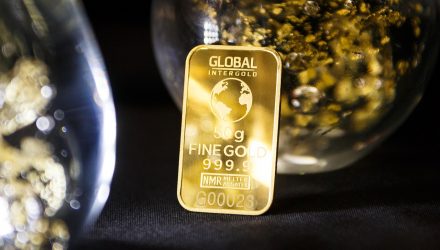 Rising Rates Could Mean the Right Time for Gold ETFs

Against this year’s backdrop of rising interest rates and the strong U.S. dollar, gold exchange traded products, including the SPDR Gold Shares (NYSEArca: GLD), are struggling. GLD, the largest gold ETF by assets, is lower by more than 5% year-to-date.

However, GLD is up more than 3% in the fourth quarter, a notable run when considering the yellow metal is entering its seasonally strong period.

“Since 2013, there’s been a more than 80 percent chance of a positive return in gold prices in January,” reports Bloomberg. “And in the past two years, the best-performing producers of the precious metal have returned as much as 40 percent during the period, according to National Bank Financial analyst Mike Parkin.”

Much of the near-term thesis for gold revolves around the Fed’s plans for interest rates. The Fed has boosted borrowing costs three times this year and market observers widely expect a fourth rate hike in December. However, President Trump has not been shy about saying he would like to see the Fed slow its pace of rate increases

Expectations that gold normally rallies around this time of year jibe with investors’ sentiment that bullion is poised to rebound in 2019.

“For the second year in a row, investors remain optimistic that gold will shine in 2019 as they search for stability in an environment of growing uncertainty and volatility, according to a survey conducted by international investment firm Legg Mason,” reports Kitco News.