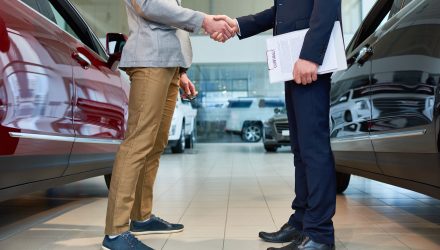 Buying an automobile has gotten more expensive, especially if consumers wish to finance the purchase in today’s economic landscape of rising rates, which has pumped the brakes on car makers offering no-interest auto loans.

No-interest loans have been vital to the car-buying space, offering consumers who meet the necessary credit requirements a chance to own the car of their dreams while foregoing the cost to borrow money. Per a report from ABC News, analysts at the car valuation site Edmunds cited that 14.6% of car deals featured no-interest auto loans in August 2017, but that number has slid to 7.4% this year.

Auto manufacturers like Toyota and Nissan are paring down their no-interest loan offerings–for example, Toyota financed 4.6% of their vehicles last August compared to 21% a year ago. For Nissan, that number has dropped by 8% compared to 2017.

In addition to cashback incentives, carmakers are on the hook for the tab to recoup the costs of money lost on no-interest loans. With less financing options available, this has also decelerated no-interest auto loan offerings due to a lack of supply, giving auto dealers less incentive to offer these zero percent loans.

The correlation between rising rates and no-interest loans doesn’t bode well for car manufacturers as more rate hikes are expected through the rest of 2018. Amid a backdrop of a GDP that increased by 4.2% in the last quarter and an extended bull run in the stock market, the Federal Reserve is expected to produce two more rate hikes in the federal funds rate by the end of 2018.

Steady diet of rising rates is in order

The economy being full steam ahead has seen the major indexes like the S&P 500 reach record levels. With no signs of slowing, it appears that a steady diet of rising rates is in order, according to Boston Federal Reserve President Eric Rosengren.