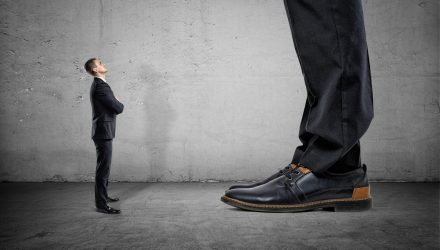 For much of 2018, small cap equities have been the little engines that could, but recently, their large cap brethren has overtaken them as investors may be pivoting from a growth-oriented portfolio to that of a value-dominated portfolio that primarily includes large capitalization equities. One reason may be rising interest rates, which have historically benefitted small caps, but the amount of leverage held by small cap companies could be a cause for concern.

In the last three months, small caps, evidenced by the Russell 2000 in the chart below, have also fallen under their 200-day moving average in addition to lagging behind the large caps found in the S&P 500.

“One of our biggest concerns around small-caps is their leverage,” said Jill Carey Hall, senior equity strategist at Bank of America Merrill Lynch. “That is now increasingly in focus given rising interest rates.”

Related: Rising Rates: What to Watch in Markets

Additionally, rising benchmark yields have been front and center as of late after last week’s ascent in key government debt yields like the 10-year and 30-year note. The concern is that in conjunction with higher rates, rising yields could increase the cost to fund smaller companies.