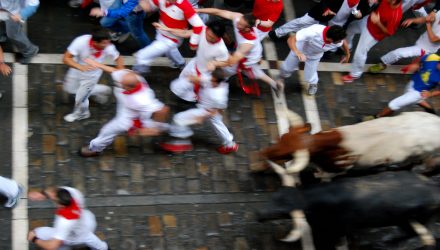 While the running of the bulls in Pamplona, Spain can elicit rising heart rates, the opposite can be said for a raging bull market in the face of rising interest rates. According to Joe Amato, Neuberger Berman president and chief investment officer, rising rates could stymie a bull market run that saw the S&P 500 record the longest in history on Wednesday.

“Typically bull markets don’t die as we often said of old age, they die often because rates rise at a rapid rate and contracts economic activity,” said Amato. “We don’t necessarily see that in the horizon–the Fed has been careful, but it’s certainly one of the things we’re watching quite closely.

Federal Reserve Chairman Jerome Powell said in a speech at the central bank’s annual retreat in Jackson Hole, Wyoming that a gradual rate hike is to be expected. In June, the Fed hiked interest rates for a second time, bringing the federal funds rate up 25 basis points to its current level of 2.