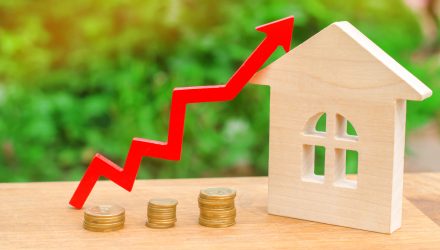 Rising borrowing costs are not necessarily a cause for concern as rising interest rates typically go hand in hand with a growing economy, and financial stocks and sector-related exchange traded funds may do especially well in this type of environment.

“When yields experience large changes in short periods of time, stocks can struggle to digest the moves,” Bernstein’s Noah Weisberger said in a note, according to CNBC.

“So long as signs continue to point to a growth-driven move in yields, we think that over the medium term, stocks will fare well,” Weisberger added.

Specifically, Weisberger singled out the financial sector as an area of the market that typically outperforms in a rising rate environment.

“In fact, we would argue that financials — particularly banks — have been held back over the last several months, with scope to catch up to where yields are already,” Weisberger said.

The equity markets pulled back Friday on rising yields in U.S. government debt after the jobs report revealed employment numbers and the economy remained strong. Investors were concerned that the easy-money conditions that have helped push U.S. stocks to record highs could come to an end. Nevertheless, the rising borrowing costs does not necessarily mean the good times will immediately end.