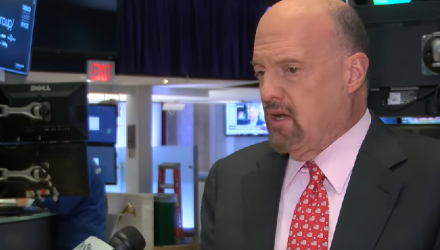 Financial market maven and CNBC “Mad Money” host Jim Cramer assessed Monday’s 600-point decline in the Dow Jones Industrial Average paired with the mass of sell-offs in October, particularly in the technology sector, as obvious signs the stock market is in “a very serious correction.”

In particular, the FANG (Facebook, Amazon, Netflix, Google-Alphabet) stocks have been on a downward spiral amid third-quarter earnings season, falling as much as 10% from their top-of-the-world 52-week highs. The fabulous four plus one more, if you want to include Apple, have been leading the growth-fueled, decade-long bull run strength to strength, but now things have gone awry.

Nonetheless, the red prices in FANG stocks should signal a buying opportunity for investors seeking a value proposition in these tech giants, but Cramer is noticing otherwise.

“Their stock is pretty inexpensive,” said Cramer. “They have more than $100 billion in cash. They own search. They own online video. They own the self-driving car market, at least for now. I think it’s an outright buy. But no one cares.”