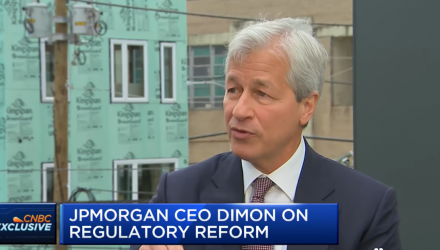 Despite the U.S. capital markets rattled with a 1,300-point loss the last two trading sessions, J.P. Morgan Chase CEO Jamie Dimon reaffirmed the strength of the economy, citing a robust labor market among a host of other factors.

Dimon’s comments regarding interest rates come in conjunction with rising Treasury yields, which have caused investor worry as of late. The benchmark 10-year Treasury note and 30-year note resumed their upward trajectory today–the 10-year yield went to 3.163, while the 30-year rose to 3.336.

Dimon’s bank reported that its third-quarter profit rose by 24% compared to a year ago, helped by the U.S. President Donald Trump administration’s tax cuts. In addition, net income was $2.34 a share, which beat estimates of $2.26 per share.