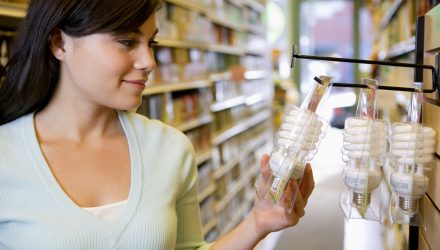 Shopping for Upside With Retail ETFs

The SPDR S&P Retail ETF (NYSEArca: XRT) is still saddled with a year-to-date loss and the largest retail ETF has been trailing the broader market and rival ETFs focusing on online shopping for over year, but some technical analysts believe retail stocks are ready to rally.

XRT could be reflecting that sentiment as the ETF is up more than 4% over the past week. On the other hand, retail sales data has recently been rough, particularly for brick-and-mortar retailers. Department stores, furniture stores, health stores, personal care stores, and gasoline stores were all down. However, internet retailers and restaurants were up. The Commerce Department said retail sales slipped 0.1 percent last month instead of falling 0.3 percent as previously expected.

“After a couple years of underperformance as shown by that falling line, we’re starting to see that trend stabilize and turn sideways,” said Ari Wald, head of technical analysis at Oppenheimer, in an interview with CNBC regarding XRT. “It’s looked poorly in recent years so we’ve had a very easy comp to base that off of.”

XRT faces competition from ETFs that are more levered to the boom in e-commerce. The trend away from traditional department stores and apparel retailers to online shopping destinations should benefit the Amplify Online Retail ETF (NasdaqGM: IBUY), which is comprised of global companies that generate at least 70% of revenue from online or virtual sales.