You are at:Home»Equity ETFs»Can Amazon Keep Driving Up Consumer ETFs? 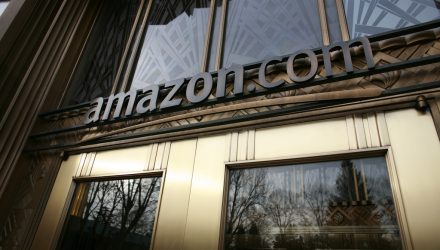 Once again, Amazon.com Inc. (NASDAQ:AMZN) is acting as the driving force behind XLY’s upside. Amazon, by far XLY’s largest holding and the largest position in other cap-weighted discretionary ETFs, is up 36% this year. That is helping XLY endure a 6% drop by Home Depot (NYSE:HD). The home improvement giant is one of XLY’s largest holdings after Amazon and is also one of the worst-performing members of the Dow Jones Industrial Average this year.

“Consumer spending has already shown the beginnings of a slowdown. Retail sales in February fell for a third month in a row, a surprise to economists looking for a slight gain and its longest stretch of declines since 2012. Fourth-quarter sales were at their strongest in seven years,” reports CNBC.

While retailers just experienced one of their best holiday sales periods in years, strong overall sales growth of over 5% was still dwarfed by a 20% jump in online sales, reflecting the ongoing shift in consumer habits to e-commerce. Looking ahead, retail disruption and performance challenges for traditional bricks-and-mortar retailers are likely to continue.

“If the Fed raises rates as expected this year, interest rates on consumer loans will rise and the availability of cheap debt will drop. The central bank is expected to raise rates at least three times this year, the first as soon as next week,” according to CNBC.