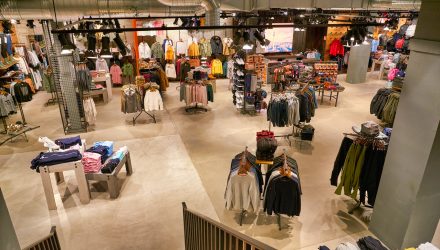 With joblessness climbing past climbing to record numbers, as 3.8 million American workers who recently lost their jobs applied last week for unemployment benefits, bringing a record number of layoffs during the coronavirus crisis to about 30 million in less than two months, now another issue has begun to plague markets as well: bankruptcy.

American retail behemoths appear to be at heightened risk right now, with some already succumbing to the economic fallout from the coronavirus pandemic. Sears, JCPenney, J.Crew, and others may not be able to endure the wrath of the coronavirus even though these companies were robust enough to survive wars, the Great Depression, the Great Recession, and the rise of online shopping.

On Monday, J.Crew filed for bankruptcy, becoming the first major retail casualty of the coronavirus era.
“The retailers who were wandering around aimlessly pre-pandemic are going to be substantially less likely to muddle through than they were before,” said Mark Cohen, director of retail studies at the Columbia Business School.
During the pandemic, stores have been shuttered, as shelter-in-place orders have dominated the majority of states, despite recent plans for reopening the country.
Retailers have furloughed hundreds of thousands of their staff and sales are plummeting as consumers have curtailed all but the most crucial purchases such as groceries and daily essentials. Depending on how long consumer demand stalls, companies may be compelled to lay off workers, shutter stores permanently or begin restructuring.
“Store-based retail was already struggling with internet consumption trends before coronavirus, and now will be faced with accelerated demand shifts to the internet,” Randal Konik, an analyst at Jefferies, said in a note to clients last week.

J.Crew Group Inc. gained momentum in the 1990s when preppy style become a hallmark in malls across America. The company has struggled in recent years, however.

The retailer filed for chapter 11 protection in U.S. Bankruptcy Court in Richmond, Va., after reaching a deal with a group of lenders and bondholders to swap about $2 billion in debt for an 82% stake in the reorganized J.Crew.

“This process gives the company a chance to survive. However, that survival is not just dependent on reduced debt; it requires a reinvention of the J.Crew brand,” said Neil Saunders, an analyst at GlobalData Retail.

JCPenney had $3.7 billion in debt at the end of 2019, and despite the fact that it has enough liquidity to survive for the next few months, it may face challenges refinancing its debt in the future, said David Silverman, senior director at Fitch Ratings.
“There’s a good chance they can survive, but this is no layup,” said Craig Johnson, president of Customer Growth Partners. “This is going to be a three-pointer deep in the corner with time running out.” JCPenney will need to drastically reduce its 850 stores, Johnson said.
The Amplify Online Retail ETF (IBUY), the VanEck Vectors Retail ETF (RTH) and the Global X E-commerce ETF (EBIZ) are all up over 1% amid the news, giving hope to investors who believe more problems could arise in retail.
For more market trends, visit  ETF Trends.