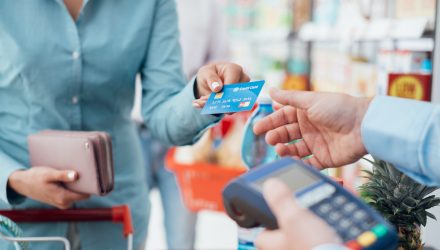 While stocks are headed for their worst weekly performance since late March, in what has been a volatile week, as investors struggled to digest disruptive economic reports, a gloomy outlook into the future from the Federal Reserve, and broadening tensions between China and the U.S., retail ETFs are a bright spot Friday.

The Dow Jones Industrial Average was positive briefly earlier in the morning but is currently trading down about 90 points, having lost roughly 300 points earlier in the day on weak consumer spending data that showed U.S. monthly retail sales lost a record 16.4% in April. The S&P 500 and Nasdaq Composite have also bounced from their lows, off 0.47% and just 0.19%, respectively.

“I guess you could say we knew it was weak,” said John Briggs, Head of Strategy at NatWest Markets. “The problem is you can’t dismiss all this bad news for April. If you have a deeper hole, you’re starting point is lower.”

Stock Index ETFs are somewhat red today as well, tracking moves in the benchmark stock indexes. The SPDR S&P 500 ETF Trust (SPY), is off by 0.1%, the SPDR Dow Jones Industrial Average ETF (DIA) is 0.42% lower, while the Invesco QQQ Trust (QQQ), which has held up slightly better than the other indexes recently, but is still in the red, is down 0.3%

While the damage from consumer spending initially dropped indexes, the key averages have grappled their way back from the worst losses as retail stocks have started to recover Friday, as of 115pm EST. The SPDR S&P Retail ETF (XRT), which tracks the retail sector stocks gained over 2% to trade 1.1% higher after slipping over 1.4% earlier in the session. The charge higher was led by retail fixtures like Office Depot, whose shares climbed over 15% to lead the ETF higher. The Global X E-commerce ETF (EBIZ) also climbed 1.25% higher amid the news.

Despite the improvements, however, there is still half a day left in trading, and the Dow and S&P 500 are both down at least 3% while the Nasdaq fell 2.5% for the week so far. Those would be the largest weekly losses for the major indexes since the week of March 20, when they dropped more than 12%.

Fed Chairman Powell acknowledged Wednesday that more needs to be done to bolster the economy, amid the ongoing coronavirus pandemic. “While the economic response has been both timely and appropriately large, it may not be the final chapter, given that the path ahead is both highly uncertain and subject to significant downside risks,” Powell said. The remarks sank the Dow and S&P 500, which lost 2.2% and 1.8%, respectively, while the Nasdaq Composite gave up 1.6%.

“Given the amount of uncertainty about this crisis that still looms, we should not be surprised by the setbacks we’ve seen in markets this week,” said Scott Knapp, chief market strategist at CUNA Mutual Group.