You are at:Home»Featured»Retail ETFs Climb with Shoppers Primed for Amazon Prime Day 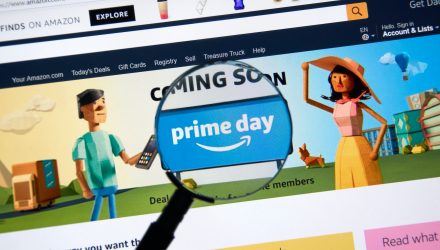 This is a huge week for online shoppers and the retailers who serve them. With the second day of Amazon’s 48-hour Prime Day event underway, the company is projected to have driven the most online sales over a 24-hour period so far in 2021, according to new data released Tuesday.

Amazon Prime Day 2021 has become a tradition for many shoppers. And this spend-fest has only accelerated thanks to the coronavirus pandemic, which has shoppers scrambling to spend money both online and in-person, having been trapped at home for the last year.

During the Prime Day sales event, Amazon Prime members can capitalize on site-wide savings on the world’s largest online retailer’s website, in categories as diverse as tech and kitchenware. It has been six years since the first Prime Day event in 2015, and it’s become such a phenomenon that it has prompted widespread competition from both Amazon sellers and partners, as well as from brick-and-mortar retailers such as Target, Walmart, Wayfair, Kohl’s, Best Buy, and Bed Bath & Beyond, who counter Amazon prices with their own short-term bargains.

Melissa Burdick, co-founder of ad tech company Pacvue, said in an interview with Bloomberg that some of companies who have traditionally offered great deals on Prime Day are now seeing significantly more competition. “If you look at 23andMe, [Prime Day deals] are one of the biggest deals that they have, there’s a lot of copycats and there are others that are paying their way to the top to get into those top spots to win,” she says.

Amazon sellers are already noticing robust performance. Mark Samuel, Founder and CEO of IWON Organics, claimed that his company had already achieved their sales record for Amazon by 7 AM on Monday, just hours into the first day of the event. “I am becoming more bullish on Amazon. We are now close to 3X my comparative sales numbers by 2:30PM.” This year, IWON offered deals for 35% off its organic protein snack products.

Sales during the first day of Amazon’s event, which commenced at 3 AM ET on Monday, were set to beat $5.6 billion, representing 8.7% growth year over year, according to an index tracked by Adobe Analytics, which looks at over 1 trillion visits to U.S. retail sites and over 100 million items across 18 product categories.

Adobe said that retailers that bring in more than $1 billion in revenue each year reported a 28% increase in e-commerce sales on Monday in contrast to the same day a year earlier, while smaller retailers, who saw less than $10 million in annual revenue, witnessed a 22% boost.

“The first day of Prime Day successfully accelerated spending momentum for U.S. e-commerce to new heights, in an online retail environment that is already experiencing elevated level of growth due to the pandemic,” said Jason Woosley, vice president of commerce product and platform at Adobe.

The most sizable cuts uncovered on Amazon’s website on Monday were for toys, Adobe said, with prices falling 12% on average. Appliances averaged a 5.2% discount, while electronics were marked down about 3%.

While Prime Day is a significant money-maker for retailers, the most significant gains come later in the year, during the holiday shopping season.

Amazon shares climbed over 1.3% by Tuesday morning, cresting $3500 per share. The company’s market cap is over $1.7 trillion.

Given the latest moves by the online retail giant, here are three ETFs for investors considering Amazon exposure: