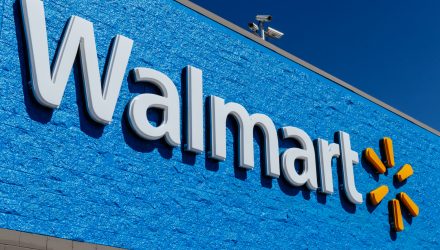 Retail ETFs are mixed on Tuesday amid news that Walmart’s fiscal third-quarter earnings beat analysts’ expectations, as price-conscious grocery shoppers returned to its stores despite spiking inflation in household staples.

Walmart’s massive size is assisting the company in navigating bottlenecked supply chains, as it negotiates with manufacturers, shores its inventory, and utilizes its own ships to move goods across the globe. The multinational retail corporation raised its forecast for 2021, suggesting that adjusted earnings per share will be around $6.40 versus its previous expectations of between $6.20 and $6.35.

Walmart CEO Doug McMillon said that the company is hopeful that it will have a full inventory available for the holiday season. Inventory for Walmart in the U.S. climbed 11.5% in anticipation of the hectic shopping season, McMillon said, with Walmart readying its seasonal merchandise and preparing space for the goods on vessels.

“There’s a level of excitement in the air,” McMillon said on the company’s earnings call. “You can feel it. I’ve been walking away from these stores with a recurring thought, ‘We’re ready, we have the people, the products, and the prices to deliver a great holiday season.’”

The news has seen mixed results among retail ETFs. While the key benchmark stock ETFs are all green on Tuesday, certain consumer discretionary ETFs with Walmart, like the iShares Evolved U.S. Discretionary Spending ETF (IEDI) are higher, up over 1.1%, while other funds like the Vanguard Consumer Staples ETF (VDC) are down on the day.

According to analysts reports from ETF Database, “VDC offers targeted exposure to the U.S. consumer staples sector, making it a potentially useful tool for those implementing a sector rotation strategy or seeking to tilt their portfolio towards low beta holdings. Vanguard ETFs are generally among the most cost efficient choices in any category, but that isn’t necessarily the case here; both FCD and XLPare slightly cheaper in terms of expense ratio. There are, however, no consumer staples ETFs that can match the depth of holdings delivered by VDC; the unique Vanguard structure allows this fund to hold more than 100 individual stocks and avoid excessive concentration in a small handful of mega cap stocks.”

Meanwhile, IEDI holds a number of key stocks beside Walmart, including Amazon, Home Depot, and Apple.

Inflation is brutally affecting consumers on a daily basis, from filling the gas tank to purchasing needed food and supplies for the household. Annual inflation climbed at its fastest pace in more than 30 years in September, according to the Commerce Department.

To that end, Walmart, known for its emphasis on “everyday low price,” is one of the retailers that is positioned to withstand a sustained period of rising prices. Consumers may opt to purchase more of their groceries, clothes, and other goods at the retailer’s stores and website instead of turning to competitors, given the store’s history of low prices.

“We’ve always been an inflation fighter for customers,” Walmart chief financial officer Brett Biggs said in an interview with CNBC. “Our scale and the product breadth that we have allows us to do things in a way that is beneficial to customers and beneficial to shareholders.”

Biggs said that food inflation has been climbing steadily lately, and that Walmart is under pressure due to the increasing cost of fuel, shipping, and products, but has been able to reduce the number of promotions without damaging sales. Also, it has gotten a lift from fresh revenue from its burgeoning advertising business.

The retailer’s CFO noted that consumers continue to purchase bulk items and have not yet significantly altered purchase preferences.

McMillon said in a press release that the company is adding market share in grocery as U.S. consumers return to stores.

“Overall, the consumer appears to us to be in really good shape,” McMillon said. “Wages are up. Jobs are available and spending appears to be strong.”