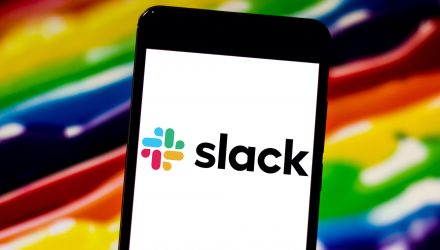 Shares of Slack were on fire on Wednesday, surging as much as 32% before tempering gains, after a report from analysts that Salesforce was in discussions to purchase the company.

While Salesforce stock dropped around 4% on the news, the Renaissance IPO ETF (IPO), which holds a significant position in Slack, gained 2.23% amid the the headlines.

If it were to come to fruition, the deal would likely value Slack at over its market cap of $17 billion, according to the report. Slack’s market cap rocketed to more than $20 billion following the WSJ report.

This would not be the first purchase for the San Francisco-based, customer relationship management service. Salesforce has been buying a number of expanding companies recently, utilizing its market cap growth in recent years to buy promising candidates like MuleSoft, for $6.5 billion in 2018, and Tableau for $15.3 billion.

One of the Largest Software Grabs Ever?

Slack would rank as one of the most massive software deals ever for the industry, in company with IBM’s $34 billion acquisition of Red Hat in 2019, Microsoft’s $27 billion grab of LinkedIn in 2016, and Facebook’s $19 billion purchase of WhatsApp in 2014.

“This would be a game changer move for Benioff & Co. to further build out its collaboration engine and product footprint as cloud spending ramps across the enterprise,” Wedbush Securities’ Dan Ives told CNBC, referring to Salesforce CEO Marc Benioff.

Despite investor enthusiasm lower, a deal is still not inked, and discussions could hit a snag, the Wall Street Journal reported.

“Our primary competitor is currently Microsoft Corporation,” Slack said when it sought to become a public company in 2019. Microsoft has a large customer base it has been able to convert to Teams, and Salesforce could give Slack a similar benefit.

Investors looking to trade Slack and other hot IPOs using ETFs can consider the Renaissance IPO, which holds rising stars like Moderna, and recent successes such as Uber and Beyond Meat. The IPO has rocketed more than 154% since March of this year.