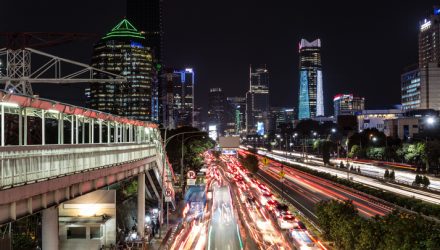 Investing in emerging markets requires paying attention to trade, as the elevated levels of volatility and sensitivity to U.S.–China headlines place macro drivers at the forefront of the EM story, especially relative to developed markets.

While mixed headlines have and will almost assuredly continue to persist, recent developments regarding trade have been quite positive. Emerging markets have been a notable beneficiary of the path towards a resolution under both absolute and relative lenses.

LIGHT AT THE END OF THE TRADE TUNNEL?

The R-Coefficient for Emerging Markets to China Remains Elevated

Given the history of positive trade developments between the U.S. and China, it is not surprising to see a fairly muted response in terms of market positioning in EM assets. That being said, EM performance, on both an absolute and relative basis, is showing notable signs of positive momentum as the basket approaches year-to-date highs.

For investors trying to assess near-term catalysts and opportunities in EM, especially relative to developed markets, we maintain our view of cautious optimism in this space, understanding the upside potential should a “phase one” deal be signed and steps towards a next phase be communicated.

Source: Bloomberg, L.P., as of November 4, 2016 to November 5, 2019. Data represents the z-scores for the relative momentum between the MSCI Emerging Markets IMI Index and the MSCI EAFE IMI Index on a rolling, 8-week basis.

Direxion Relative Weight ETFs Risks – Investing involves risk including possible loss of principal. The Funds’ investments in derivatives may pose risks in addition to, and greater than, those associated with directly investing in or shorting securities or other investments. Investing in, and/or having exposure to, emerging markets instruments involves greater risks than more developed markets due to the potential for greater market volatility, lower trading volume, higher levels of inflation, political and economic instability, greater risk of market shutdown and more government limitations on foreign investments in emerging market countries than typically found in more developed markets. There is no guarantee that the returns on the Funds’ long or short positions will produce high, or even positive returns and a Fund could lose money if either or  both  of  the  Fund’s  long  and  short  positions  produce  negative  returns. Please see the summary and full prospectuses for a more complete description of these and other risks of the Funds.