You are at:Home»Relative Value Channel»Tom Lydon Discusses Value of Cyclical ETFs Over Defensives On CNBC 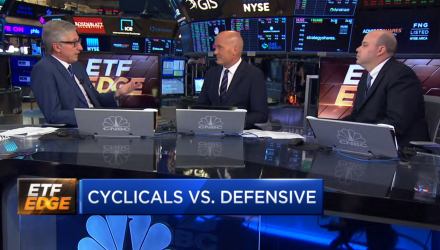 With talk of the recent volatility of cyclical trade and whether or not investors should be defensive with their investment portfolios, host Bob Pisani noted defensive names in consumer staples have been holding up, but if a resolution to the trade issue arises, defensive names are going to do better. This leads to a question for Rosenbluth concerning where people should put their money.

Rosenbluth put the spotlight on the Direxion MSCI Cyclicals Over Defensive ETF (RWCD).

“It favors the cyclical side, so technologies, the financials, the consumer discretionary; it’s along that, and it’s short the defensive ones like utilities and consumer staples,” Rosenbluth said. With an ETF as compelling as RWCD, Rosenbluth does believe the economic growth picture is going to improve, and the earning’s pictures are going to be strong.

Lydon then chimed in with his thoughts on some of the new ETF, particularly cyclical over defensive, and whether there is a future there. Remarking on Direxion, Lydon stated how admirable a job they have done in putting a suite together, a creative strategy with interesting combinations for the fund.

Given how RWCD has been described as a good pure bet, Rosenbluth adds the benefit of targeting your exposure.

Rosenbluth continues, “Or you could play the defensive side with utilities, or dividend-oriented stock, but you again have a mix of it.” RWCD allows you to be more targeted. Direxion has proven to be a firm that’s stood out, compared to many other larger firms not coming up with new products in 2019.

Shifting gears to individual concepts, Pisani noted a recent move by iShares to launch iShares Self Driving EV And Tech ETF (IDRV), which consists of Google, and various auto companies. However, he raised concern over generating revenue with an ETF that owns any of the automobile stocks.

Lydon agrees, noting, the hugely popular trend of ETFs, but the necessity to check how they have been put together in an effort to assure the bottom line of the various companies affects the overall objective of the ETF. With regard to IDRV, Lyndon adds, “In this case, it’s clearly not the case.”