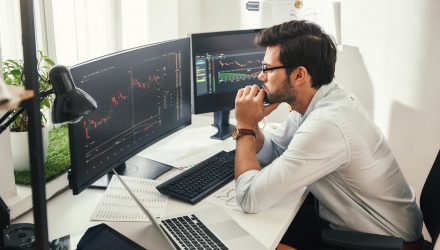 After notching new highs during overnight holiday trading, markets lost over 1% on a warning from tech behemoth Apple which incited concerns over the coronavirus and its effect on corporate profits and the global economy.

Apple admonished investors that the company does not anticipate it will achieve its quarterly revenue forecast, citing diminished production and anemic demand in China as a result of the coronavirus outbreak. The tech monster initially said it expected to report net sales between $63 billion to $67 billion in its fiscal second quarter.

“In the short-term myopia of market consensus thinking, this downward cycle of first-quarter 2020 EPS estimates will be a short-term headwind,” said Tom Lee, founder and head of research at Fundstrat Global Advisors. “Expect a lot of negative chatter in the next few weeks.”

The Dow Jones Industrial Average lost 224 points or 0.8% on the news, as the index is headed to close down for its third day in a row. Meanwhile the S&P 500 dropped 1% from it’s recent high, while the Nasdaq Composite slipped 0.3%. U.S. markets were closed on Monday for the Presidents Day holiday, but opened with a sizable gap down in overnight Tuesday trading.

Major stock index ETFs echoed the fall in equities, with the SPDR S&P 500 ETF Trust (SPY) falling roughly 0.6% from Friday before recovering a bit, while the SPDR Dow Jones Industrial Average ETF (DIA), which has suffered the most, fell 1.3% from it’s recent highs. The Invesco QQQ Trust (QQQ) is holding up the best with a 0.20% loss today, despite a precipitous fall from fresh highs.

While shares of Apple traded 2.5% lower Tuesday, some analysts believe the news may not have a long-term effect on the stock.

“While this is disappointing, by now we don’t believe it’s surprising, and we still expect the issues to be transitory,” said Chris Caso, an analyst at Raymond James, in a note. “We think almost all of the production and most of the demand is likely to be recaptured once Apple’s manufacturing partners are able to return to full production, and once retail facilities in China return to normal.”

China’s National Health Commission on Tuesday released news of an additional 98 deaths in the country, with 1,886 new cases of the coronavirus. As of Feb. 17, the commission noted there had been a total of 72,346 confirmed cases and 1,868 deaths, easily surpassing the carnage from the SARS epidemic.