You are at:Home»Relative Value Channel»Small-Cap ETFs Lag Behind Their Large-Cap Peers 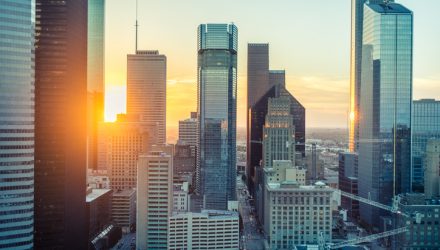 A measure of the relative performance of small compared to big company shares showed the level of the small-cap benchmark earlier this month at about 51.8% of the level of the bigger gauge, or the lowest level since March 2009, the Wall Street Journal reports.

The diverging fortune between the small-cap and large-cap segment is a cause for concern for some investors. Small-cap stocks, which focus more of on the domestic economy, typically strengthens ahead of a wider market rally and fall more quickly ahead of a broader pullback.

“This is simply about fears of an economic slowdown,” Benjamin Nahum, portfolio manager for the Neuberger Berman small and midcap intrinsic value strategy, told the WSJ. “You don’t really want to own them if you suspect it’s late-cycle.”

“Given their domestic focus, they should be doing better in general,” Sally Pope Davis, a portfolio manager at Goldman Sachs Asset Management, told the WSJ, adding that a “snapback” could be coming ahead.

Smaller companies also usually have smaller cash reserves and will rely on borrowing, which makes them more sensitive to interest rate movements. While the monetary policy outlook seems more favorable with the Federal Reserve hinting at rate cuts ahead, investors remain wary of global growth.

“You still have this overall flight to stability in the markets,” Timothy Skiendzielewski, investment director in the U.S. equities team at Aberdeen Standard Investments, told the WSJ. “If you’re on the fence that things might become better with the Fed becoming more accommodative, why not push more into large-caps, so you have more stability?”