You are at:Home»Relative Value Channel»Oil ETFs Slide on Uncertain Outlook, Growing Rift Between OPEC and Russia 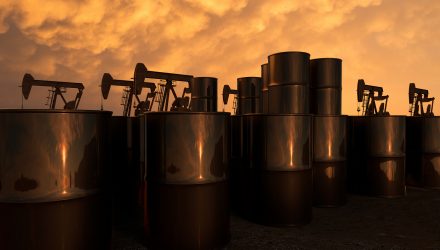 In light of falling oil prices, the Saudi kingdom, Kuwait and the United Arab Emirates, which combined make up over half of OPEC’s production capacity, convened this week to discuss a possible output cut of as much as 300,000 barrels a day, the Wall Street Journal reports.

A “300,000-bpd cut would only partially compensate for the lost demand as a result of the coronavirus epidemic,” Marshall Steeves, energy markets analyst at IHS Markit, told MarketWatch. “The extent and duration of lost demand remains to be seen given that the outbreak has yet to peak and it isn’t clear when that might happen.”

As coronavirus outbreak intensifies, a rift has grown between the partnership of Russia and the Saudi-led Organization of the Petroleum Exporting Countries. If the Saudis, Kuwait and the U.A.E. break with the Russians, the divided would further weaken the cartel’s ability to support oil prices.

The OPEC-Russia alliance showed cracks at an emergency meeting earlier in February when Russia rejected a Saudi proposition to further diminish oil production by 600,000 barrels a day. Russian officials argued that there wasn’t a need for reductions, according to the people familiar with the matter, as they point to recovering business activity in China and argue that the impact of the virus on oil demand is limited.