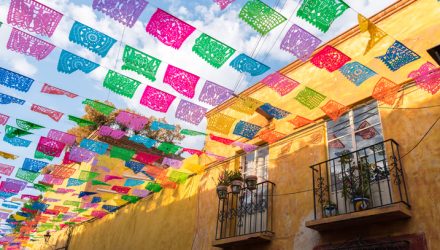 The Mexico country-specific ETF was among the standout performers on Monday after President Donald Trump announced he will drop further plans for tariffs on Mexican goods.

The iShares MSCI Mexico Capped ETF (NYSEArca: EWW) increased 2.7% on Monday and was testing both its short- and long-term resistance at the 50- and 200-day simple moving averages, respectively.

“The news of the deal with Mexico is likely to power global equities higher,” Ben Emons, managing director for global macro strategy at Medley Global Advisors, told Bloomberg. “Averting tariffs on Mexican goods is a relief for the U.S. economy because it reduces uncertainty. It is positive for auto companies and other corporations that are highly leveraged to the Mexican border supply chain.”

The U.S. dropped its threat to execute tariffs on Mexico after the two countries came to a deal to combat illegal migration from Central America.

“The deal is conditional upon farm purchases,” Medley added. “Those were already agreed under the USMCA. So long as Mexico commits to cooperate in the asylum policy and uses additional forces and resources at the border to stem the migrant flow, markets will judge the deal as credible. That is what is playing out now.”

Many previously feared that the escalation in the trade war with our southern neighbor would drag on growth and even send Mexico’s economy into a recession.

Further adding to the global risk-on sentiment, markets worldwide strengthened for the fourth day amid speculation the Federal Reserve will move to cut interest rates to bolster the U.S. economy after a report revealed employers added the fewest jobs in three months while wage gains were muted.

“If there is one constant that keeps the S&P ticking, it’s the Federal Reserve cheap money,” Stephen Innes, head of trading and market strategy at SPI Asset Management, said in a note.