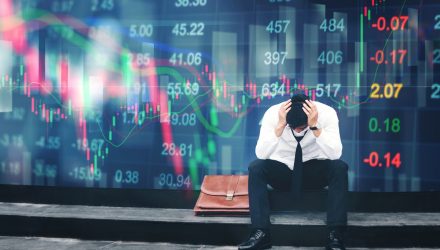 U.S. markets are in the red Friday following President Trump saying Thursday that the U.S. will impose 10% tariffs on $300 billion of Chinese goods starting September 1.

After a tumultuous week, when markets fell following the Fed announcement that there might not be any more rate cuts for the remainder of the year, today’s selloff is just another indication of volatility after markets have been quiet for months, slowing grinding out new new highs.

As of 11:45 am ET, the Dow is off 280 points while the S&P 500 is down 30 points, as selling continues following President Trump’s announcement.

“Trade talks are continuing, and during the talks the U.S. will start, on September 1st, putting a small additional Tariff of 10% on the remaining 300 Billion Dollars of goods and products coming from China into our Country…We look forward to continuing our positive dialogue with China on a comprehensive Trade Deal, and feel that the future between our two countries will be a very bright one!” Trump said in a tweet on Thursday.

The surprise tariff announcement resulted after the U.S. and China restarted trade talks in Shanghai this week, following the in-person G-20 truce recently, where both parties claimed there would be no foreseeable tariffs. The White House explained on Wednesday before this Trump tweet that the meetings were “constructive,” adding that China reaffirmed the United States’ commitment to enhance purchases of U.S. agricultural exports. Trade negotiations will be on-hold now, reengaging again in Washington in early September, according to the White House statement.

While it’s unclear what has motivated President Trump to terminate the trade war ceasefire with these new tariffs, one thing is certain: the markets don’t like it. Thursday is the fourth day in a row the markets are down and headed for a lower close once again.

The markets had been up considerably after there was a reexamination of the Fed’s statement yesterday that the 25 basis point rate cut was just a “midcycle adjustment to policy,” which ultimately sent the markets into a tailspin.

“The intention is very much like 1995-96,” said Jonathan Wright, a Johns Hopkins University economics professor and a former Fed researcher. “Time will tell if it works out quite that way.” Those rate cuts extended that expansion into 2001.