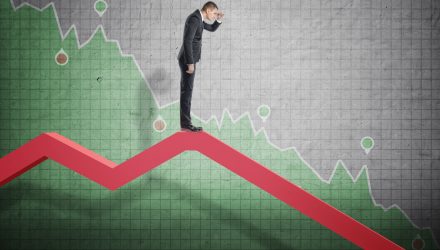 After attempting a strong rebound on Friday, where equities climbed nearly 10%, markets gave back all those gains and more, to fall below the lows of Friday after the Federal Reserve initiated a massive monetary stimulus campaign and cut interest rates yet again, to curtail declining economic growth surrounding the coronavirus outbreak.

The S&P 500 plummeted over 345 or 12.8% from its high Friday before finding a temporary low, while the Dow Jones Industrial Average fell almost 3000 points, or 13% from its close on Friday before bouncing. The Nasdaq Composite tanked a similar percentage. The major averages have since bounced from their lows are attempting to stabilize amid skyrocketing volatility and rampant fear,

Monday’s losses dropped the S&P 500 and Nasdaq over 26% below their record highs set in late February, while the Dow was 28% below its all-time high from last month, with as much as a 30% drop for the Dow at one point.
Like last week, futures traders once again found themselves trapped “limit down” in overnight Sunday trading, as trading was halted due to a precipitous initial crash in an attempt to stem investor responsibility and offer a pause. Then once again, for 15 minutes briefly, after the open, there was an additional 8.14% drop on the S&P 500, which triggered a “circuit breaker.” This was the third time in the last week that the circuit breaker was exercised.
While the Federal Reserve move to cut rates in an emergency meeting would seem to have a sanguine effect on markets, it seems investors are looking for a resolution to the coronavirus epidemic before stepping in to buy stocks and invest in the economy. Now analysts are concerned the Fed mat have exhausted valuable monetary resources at its disposal.

“The Fed blasted its monetary bazooka for sure,” said Peter Boockvar, chief investment officer at Bleakley Advisory Group. “This better work because I don’t know what they have left, and no amount of money raining from the sky will cure this virus. Only time and medicine will.”

In coordination with news releases implying the White House is readying for a tax break for consumers and a bailout for the airline industry, the Fed’s decision, made some investors more optimistic on the market, however, potentially driving markets off lows.

The Fed slashed interest rates down to virtually zero, or their lowest level since 2015, which had held since the depths of the financial crisis. The U.S. central bank also embarked on a massive $700 billion quantitative easing program. President Trump said he was “very happy” with the announcement, adding: “I think that people in the markets should be very thrilled.”

“This, coupled with an important fiscal package, should help cushion the economic downside from the virus’ effect on economic activity,” said Quincy Krosby, chief market strategist at Prudential Financial. “It’s going to be positive, but the market is at the mercy of the virus and at the mercy of whether the containment policies work.”

Investors who are more optimistic about market prospects after the rate cuts and stimulus plans might consider ETFs like the Vanguard Total Stock Market ETF (VTI) or the Vanguard High Dividend Yield ETF (VYM), which offer better dividends than current interest rates as well as access to the broad market.