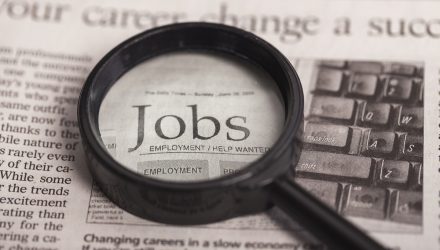 The U.S. jobs front keeps improving with a jobs report released today showing a robust 263,000 new hires, while the unemployment rate fell to 3.6% from 4% previously, the lowest level since 1969, or 49-year lows, the Labor Department reported Friday.

U.S. employers added 263,000 workers to payrolls in April, far exceeding the median forecast of 180,000, the Department of Labor reported this morning from Washington. The March hiring rate was revised slightly lower to reflect gains of 189,000 from the 196,000 that was originally reported. This came at the expense of labor force participation, as the percentage of Americans employed or actively searching for work dropped to 62.8% from 63%.

Average hourly earnings grew 0.2% month-on-month, which was slightly below expectations. Generally, lukewarm wage growth is often viewed as a sign of weak inflation. This was immediately recognized by the bond market though, and U.S. Treasury prices rose.

“Leaving aside month-to-month fluctuations, the labor market is still very strong, adding almost double the number of workers needed to keep pace with new entrants to the labor force in any given month,” said Eric Winograd, AllianceBernstein’s senior economist, according to CNBC. “Wages may have been slightly tepid this month relative to expectations but are still growing at just about the highest rate this cycle, and the unemployment rate is at multi-generational lows.”

GDP increased 3.2% during the first quarter, which dramatically exceeded expectations, while productivity during the quarter jumped 3.6% for its best gain in five years. Pending home sales rose 3.8% in March, providing some hope for the real estate market, especially if rates remain stable.