Why Relative Value Investing is Simpler Than Ever
You are at:Home»Relative Value Channel»Fed President: “Slower Growth Shouldn’t Necessarily Come as a Surprise” 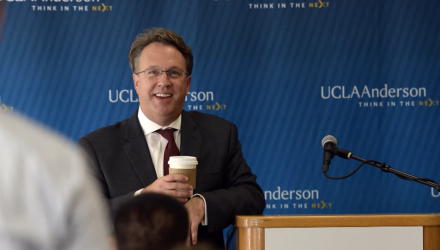 The stock market might be saying one thing, but the economy might be saying another and in this case, slower growth could be looming despite the rebound in U.S. equities, according to New York Federal Reserve President John Williams.

The Dow Jones Industrial Average is up 10.63 percent, the S&P 500 is up 11.28 percent and the Nasdaq Composite is 14.18 percent higher through Tuesday’s close. Despite this, Williams said during a speech to the Economic Club of New York that gross domestic product (GDP) growth will likely slow to 2 percent in 2019 after a year of 3 percent growth.

Williams cited three major factors for the lowered estimate: a global economic slowdown, tighter financial conditions, and geopolitical uncertainty. However, an eventual slowdown in GDP growth shouldn’t be cause for alarm.

“Now, I know this talk of slowing growth is causing uncertainty, some hand-wringing, and even fear of recession. But slower growth shouldn’t necessarily come as a surprise,” Williams said in prepared remarks. “For quite some time, the economic fundamentals have pointed to GDP growth much lower than what we saw in the 1990s, for example.”

As for interest rate policy for 2019, Williams said the Fed will be data-dependent and more flexible. The Fed was obstinate in its rate-hiking measures in 2018 with four increases in the federal funds rate.

“The base case outlook is looking good, but various uncertainties continue to loom large. Therefore, we can afford to be flexible and wait for the data to guide our approach,” Williams said.

“We’ll consider the full range of data, the headline statistics, the market indicators, and we’ll listen to our business contacts on the ground, as we aim to keep the economy on its current course of a strong labor market, sustainable growth, and 2 percent inflation,” said Williams.

Related: Why Relative Value Investing is Simpler Than Ever

Patience is Key with Interest Rates

During his recent testimony before Congress on Tuesday, Federal Reserve Chairman Jerome Powell said that “crosscurrents and conflicting signals” are warranting a patient approach with respect to interest rate policy.