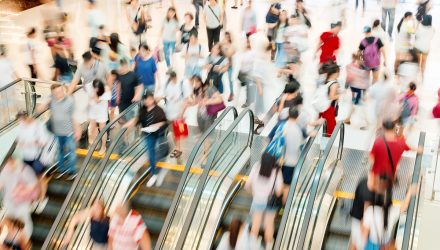 Economic Data Shows Markets Could Be Stronger Than They Appear

While daily economic news seems all doom and gloom recently, the latest release of U.S. economic data on Thursday shows a hungry consumer and an assorted delineation for the manufacturing sector, which is still better than expected. Based on the data, economists surveyed in the CNBC/Moody’s Analytics Rapid Update raised their forecasts for third quarter GDP by 0.2 to a median 2.1% pace of growth.

While industrial production was anemic, falling 0.2% in July after gaining a revised 0.2% in June, productivity in the second quarter grew at a better-than-expected pace of 2.3%, painting a somewhat rosier economic picture than expected.

“The U.S. is pretty strong actually. The markets are trading more off the headline risk, particularly around tariffs, than the actual fundamentals, at least from the U.S. data,” said Tony Bedikian, head of global markets at Citizens Bank. “The jury is still out whether the market is going to be correct here, and whether we are going to see a slowdown. We’re not seeing that in the data. Broadly, we’ve seen some slower growth, but it’s still growth. It’s waning a bit but it’s still kind of a Goldilocks scenario.”

Bond market is not reflecting reality

Although the yield curve inverted yesterday, tanking stocks in its wake, Chris Rupkey, MUFG’s chief financial economist, said the bond market is not reflecting reality but fear brought on by the U.S.-China trade wars.

“It’s certainly overstated. If you look at retail sales, one of the signs of a recession is three consecutive monthly declines in retail sales, and we’re seeing just the opposite,” said Rupkey. He noted that retail sales reports were weak at the end of last year and beginning of this year before recovering.

“The biggest surprise is consumer spending continues at such a rapid rate. There’s still a question mark over the trade war and what that’s doing to manufacturing production in this country,” Rupkey added. “I think the more powerful data is really the consumer. The consumer is two-thirds of the economy. Manufacturing is only 10% of private jobs.”

Investors looking to stave off the effects of a yield curve inversion can seek out safety or diversification with investments like gold and emerging market ETFs like SPDR Gold Shares (GLD), iShares Currency Hedged ETF (HEEM) or the iShares Emerging Market ETF (EEM).