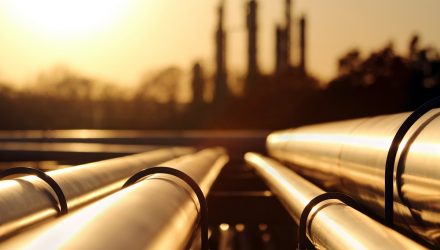 Crude oil continued to decline Monday on concerns that the global economy would deteriorate further after President Donald Trump voided a tariff ceasefire with China. The president said additional tariffs of 10% on the remaining $300 billion in Chinese goods would be added in September.

As a result, West Texas Intermediate Crude Oil dropped 7.9% to $53.95. WTI broke a 5-day winning streak with its worst daily performance in more than 4 years, with ETFs like the United States Oil Fund (USO), the VelocityShares 3x Long Crude Oil ETN (UWT), and the ProShares Ultra Bloomberg Crude Oil (UCO) following suit, down more than 6%, more than 18%, and more than 12.25% respectively.

Dave Nadig of ETF.com said on CNBC, “We are in a global oil glut, and we’ve got OPEC trying to do something about it, but all on the backs of Saudi Arabia. That’s not gonna last forever. You know I think there’s really nothing I can look at other than maybe a calamity in the Persian Gulf that would drive prices up. Everything is pointing towards oversupply. And on the demand-side were seeing signs of global recession possibly in the works. None of that is ever good for energy prices.”

For some experts however, things look darkest before the dawn, and this downtrend in oil could present an opportunity for not only investing in oil but diversifying in currencies as well.

Kevin O’Leary of O’Shares explained, “Here’s what I like to do. If I want to go long oil and I’m starting to get interested because it’s been crushed so much. The time to buy oil is when everybody hates it and they’ve been hating it a lot right now. But you don’t have to buy the oil itself. You can buy the currency’s and indices of countries that are basically tied and pegged to oil prices. I’ll give you to an example. Australia moves very closely to the price of oil. But the one that’s even closer is Canada. You can basically buy or transfer some dollars into Canadian dollars and vine index like the XIU, Which is a 60 stock index of Canada, which is basically energy and banking. But here’s the sweet one: if oil moves you get a lift in the currency and you get a lift in the index, which is how I play it.”