You are at:Home»Relative Value Channel»Crude Oil Continues Rally Off $50 Level 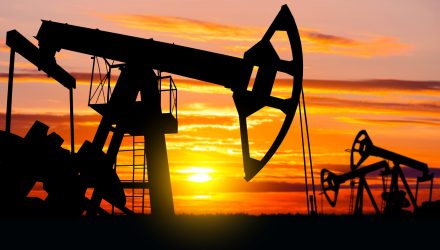 Since bouncing off the key $50 level, crude oil futures posted their highest settlement in nearly three weeks on Thursday, with Brent oil rallying to its seventh session advance in a row.

After a precipitous drop due to the coronavirus, excess supply, and a number of other factors, West Texas Intermediate crude oil has bounced off the $50 level several times over the last couple of weeks and continuing its move higher Thursday, up another 0.39% to $53.77 a barrel.

A number of other factors have been at work in propping up the oil market, in addition to the technical $50 level.

Venezuelan President Nicolas Maduro has affirmed an emergency for the country’s oil industry, calling for measures to ensure Venezuela’s energy security, according to Sputnik news.

“I declare an emergency situation in the oil industry by constitutional and presidential decree in order to take urgent and necessary measures to ensure the country’s energy security and protect the industry from imperialist aggression,” Maduro said.

“Clause 2 creates a plenipotentiary presidential commission for the protection, restructuring and reorganization of the national oil industry”.

Reuters quoted Maduro as saying, “The sanctions, the blockade – I will not accept any more excuses. I am signing a decree to declare an energy emergency in the hydrocarbons industry in order to adapt necessary and urgent measures to guarantee national energy security and protect the industry from imperialist aggression.”

The declaration occurred just one day after Washington instituted sanctions on a Rosneft trading unit for conducting business with the Maduro government, which the United States has declared illegitimate.

“Today we sanctioned Russian-owned oil firm Rosneft Trading S.A., cutting off Maduro’s main lifeline to evade our sanctions on the Venezuelan oil sector. Those who prop up the corrupt regime and enable its repression of the Venezuelan people will be held accountable,” Secretary of State Mike Pompeo said in a tweet.

Venezuela is already under strict U.S. sanctions as the Trump administration increases its campaign to remove Maduro from power.

“Venezuela’s exports, which have already seen long-term declines in recent years, could see a more pronounced drop in the weeks ahead following targeted US sanctions against the trading arm of Russia’s Rosneft,” said Robbie Fraser, senior commodity analyst at Schneider Electric. Rosneft has “played a key role in moving Venezuelan cargoes to major demand destinations.”

However, “the affected volumes aren’t necessarily to enough to rattle a crude market more concerned with demand weakness, though it could add targeted support to heavier crude grades,” said Fraser, in a daily note.

In addition to the sanctions, the released number of new daily cases of China’s coronavirus has declined, calming concerns over the disease’s impact on the economy and on energy demand.

“Market fears about falling oil demand are not misplaced, but they have probably been exaggerated by the outbreak of the coronavirus and the resulting economic uncertainty,” economists at The Economist Intelligence Unit wrote in a report released late Tuesday.

For investors looking to for downside in the oil market, ETFs such as ProShares Ultra Bloomberg Crude Oil (SCO), DB Crude Oil Double Short ETN (DTO), ProShares UltraPro 3x Short Crude Oil ETF (OILD) enable investors to satisfy their short bias. However, ETFs like SCO are intended as a short-term tactical investment to be held only for a one-day exposure period. These are not the best choice for buy-and-hold investors. Meanwhile, an ETF like the United States Oil Fund (NYSEArca: USO) could be used to play the long side if looking for continued gains.