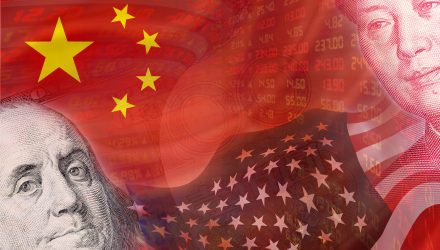 China responded to the latest tariff threats by U.S. President Donald Trump by promising to take “necessary countermeasures” if the Trump administration follows through on its threat to increase tariffs on Chinese goods this Friday.

China’s Commerce Ministry said on Wednesday that it will make retaliatory moves if U.S. tariffs on $200 billion of Chinese goods are increased to 25% from 10% as promised by the Trump administration.

As the threat of trade wars permeate the capital markets, volatility rained down on U.S. equities and saw the Dow Jones Industrial Average fall as much as 600 points before settling for a 473-point drubbing at the close of Tuesday’s trading session. It was the Dow’s worst loss since January 3 as the wall of worry got taller over U.S.-China trade talks deteriorating.

President Trump threatened to impose a higher an increase in existing tariffs on Chinese goods on Friday with the hope that it will force China’s hand in relenting to a trade deal. Various reports reveal that China has been waffling on its negotiations with the U.S., which caught the ire of President Trump, causing him to send tweets that roiled the markets.

The reason for the China pullback & attempted renegotiation of the Trade Deal is the sincere HOPE that they will be able to “negotiate” with Joe Biden or one of the very weak Democrats, and thereby continue to ripoff the United States (($500 Billion a year)) for years to come….