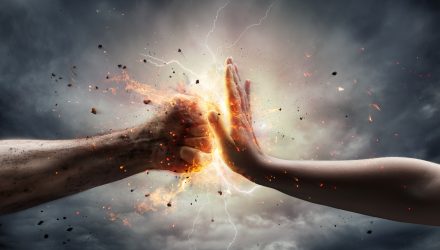 After stumbling out of the 2018, investors are seeing better results for U.S. equities in 2019, which could lead to a less defensive posture than originally anticipated. As such, investors looking for continued upside in U.S. cyclical sectors over defensive sectors, the Direxion MSCI Cyclicals Over Defensives ETF (NYSEArca: RWCD) offers them the ability to benefit not only from cyclical sectors potentially performing well, but from their outperformance compared to defensive sectors.

At a 0.45 percent expense ratio, RWCD seeks to accomplish the following:

If a risk-on sentiment continues to permeate the capital markets via stronger economic data, this could set the state for cyclical strength.

On Monday, the Commerce Department reported that U.S. consumer spending rose by the most in over nine-and-a-half years over March while pricing pressures remained muted, with a key inflation gauge posting its smallest annual rise in 14 months, underscoring the Federal Reserve’s dovish stance on interest rates ahead.

Thus far, a better-than-anticipated earnings season has also supported the rally in U.S. equities. About 160 S&P 500 companies are set to report quarterly results this week. Analysts now project profits of S&P 500 companies will dip 0.2%, compared to previous expectations of a 2% decline at the start of the month, according to Refinitiv data.

Furthermore, the U.S. economy rebounded in the first quarter this year, beating analysts’ expectations of 2.5 percent growth with a 3.2 percent growth number.